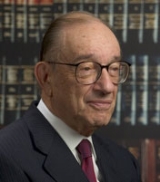 Greenspan came to the Federal Reserve Board from a successful consulting career, holding laissez-faire
Laissez-faire
In economics, laissez-faire describes an environment in which transactions between private parties are free from state intervention, including restrictive regulations, taxes, tariffs and enforced monopolies....
economic views influenced by Ayn Rand
Ayn Rand
Ayn Rand was a Russian-American novelist, philosopher, playwright, and screenwriter. She is known for her two best-selling novels The Fountainhead and Atlas Shrugged and for developing a philosophical system she called Objectivism....
.

What di alan do that was a major event
More

Career after the Federal Reserve

Greenspan and the housing bubble

Greenspan as Chairman of the Federal Reserve

Capitalism is based on self-interest and self-esteem; it holds integrity and trustworthiness as cardinal virtues and makes them pay off in the marketplace, thus demanding that men survive by means of virtue, not vices. It is this superlatively moral system that the welfare statists propose to improve upon by means of preventative law, snooping bureaucrats, and the chronic goad of fear.

The Assault on Integrity, 1963

I guess I should warn you, if I turn out to be particularly clear, you've probably misunderstood what I said.

Since becoming a central banker, I have learned to mumble with great incoherence. If I seem unduly clear to you, you must have misunderstood what I said.

Speaking to a Senate Committee in 1987, as quoted in the Guardian Weekly, November 4, 2005

The reason there is very little support for the gold standard is the consequences of those types of market adjustments are not considered to be appropriate in the 20th and 21st century. I am one of the rare people who have still some nostalgic view about the old gold standard, as you know, but I must tell you, I am in a very small minority among my colleagues on that issue.

Speaking to a Hearing before the U.S. House of Representatives' Committee on Financial Services in 7/22/1998
More
x