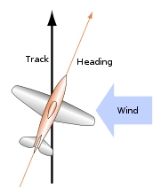 Successful air navigation involves piloting an aircraft from place to place without getting lost, breaking the laws applying to aircraft, or endangering the safety of those on board or on the ground
Earth
Earth is the third planet from the Sun, and the densest and fifth-largest of the eight planets in the Solar System. It is also the largest of the Solar System's four terrestrial planets...
. Air navigation differs from the navigation of surface craft in several ways: Aircraft travel at relatively high speeds, leaving less time to calculate their position en route.

I'm currently working on displaying error of elliptic positioning. Do you know any source which might be useful in this field of study? Thank you.
More
x