Overview
Agronomy is the science and technology of producing and using plants for food, fuel, feed, fiber, and reclamation. Agronomy encompasses work in the areas of plant genetics, plant physiology, meteorology, and soil science. Agronomy is the application of a combination of sciences like biology, chemistry, economics, ecology, earth science, and genetics. Agronomist
Agronomist
An agronomist is a scientist who specializes in agronomy, which is the science of utilizing plants for food, fuel, feed, and fiber. An agronomist is an expert in agricultural and allied sciences, with the exception veterinary sciences.Agronomists deal with interactions between plants, soils, and...
s today are involved with many issues including producing food, creating healthier food, managing environmental impact of agriculture, and creating energy from plants. 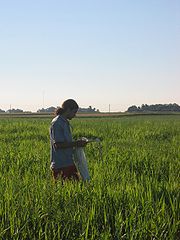 Agronomy is the science and technology of producing and using plants for food, fuel, feed, fiber, and reclamation. Agronomy encompasses work in the areas of plant genetics, plant physiology, meteorology, and soil science. Agronomy is the application of a combination of sciences like biology, chemistry, economics, ecology, earth science, and genetics. Agronomist
Agronomist
An agronomist is a scientist who specializes in agronomy, which is the science of utilizing plants for food, fuel, feed, and fiber. An agronomist is an expert in agricultural and allied sciences, with the exception veterinary sciences.Agronomists deal with interactions between plants, soils, and...
s today are involved with many issues including producing food, creating healthier food, managing environmental impact of agriculture, and creating energy from plants. Agronomists often specialize in areas such as crop rotation
Crop rotation
Crop rotation is the practice of growing a series of dissimilar types of crops in the same area in sequential seasons.Crop rotation confers various benefits to the soil. A traditional element of crop rotation is the replenishment of nitrogen through the use of green manure in sequence with cereals...
, irrigation
Irrigation
Irrigation may be defined as the science of artificial application of water to the land or soil. It is used to assist in the growing of agricultural crops, maintenance of landscapes, and revegetation of disturbed soils in dry areas and during periods of inadequate rainfall...
and drainage
Drainage
Drainage is the natural or artificial removal of surface and sub-surface water from an area. Many agricultural soils need drainage to improve production or to manage water supplies.-Early history:...
, plant breeding
Plant breeding
Plant breeding is the art and science of changing the genetics of plants in order to produce desired characteristics. Plant breeding can be accomplished through many different techniques ranging from simply selecting plants with desirable characteristics for propagation, to more complex molecular...
, plant physiology
Plant physiology
Plant physiology is a subdiscipline of botany concerned with the functioning, or physiology, of plants. Closely related fields include plant morphology , plant ecology , phytochemistry , cell biology, and molecular biology.Fundamental processes such as photosynthesis, respiration, plant nutrition,...
, soil classification
Soil classification
Soil classification deals with the systematic categorization of soils based on distinguishing characteristics as well as criteria that dictate choices in use.- Overview :...
, soil fertility, weed control
Weed control
Weed control is the botanical component of pest control, using physical and chemical methods to stop weeds from reaching a mature stage of growth when they could be harmful to domesticated plants and livestock...
, insect
Insect
Insects are a class of living creatures within the arthropods that have a chitinous exoskeleton, a three-part body , three pairs of jointed legs, compound eyes, and two antennae...
and pest control
Pest control
Pest control refers to the regulation or management of a species defined as a pest, usually because it is perceived to be detrimental to a person's health, the ecology or the economy.-History:...
.

This area of agronomy involves selective breeding
Selective breeding
Selective breeding is the process of breeding plants and animals for particular genetic traits. Typically, strains that are selectively bred are domesticated, and the breeding is sometimes done by a professional breeder. Bred animals are known as breeds, while bred plants are known as varieties,...
of plants to produce the best crops under various conditions. Plant breeding has increased crop yields and has improved the nutritional value of numerous crops, including corn
Maize
Maize known in many English-speaking countries as corn or mielie/mealie, is a grain domesticated by indigenous peoples in Mesoamerica in prehistoric times. The leafy stalk produces ears which contain seeds called kernels. Though technically a grain, maize kernels are used in cooking as a vegetable...
, soybeans, and wheat
Wheat
Wheat is a cereal grain, originally from the Levant region of the Near East, but now cultivated worldwide. In 2007 world production of wheat was 607 million tons, making it the third most-produced cereal after maize and rice...
. It has also led to the development of new types of plants. For example, a hybrid grain called triticale
Triticale
Triticale is a hybrid of wheat and rye first bred in laboratories during the late 19th century. The grain was originally bred in Scotland and Sweden. Commercially available triticale is almost always a second generation hybrid, i.e., a cross between two kinds of primary triticales...
was produced by crossbreeding rye and wheat. Triticale contains more usable protein
Protein
Proteins are biochemical compounds consisting of one or more polypeptides typically folded into a globular or fibrous form, facilitating a biological function. A polypeptide is a single linear polymer chain of amino acids bonded together by peptide bonds between the carboxyl and amino groups of...
than does either rye or wheat. Agronomy has also been instrumental in fruit and vegetable production research. It is understood that the role of agronomist includes seeing whether produce from a field of 'x' meets the following conditions:
1. Land and water access,
2. Commercialization (market),
3. Quality and quantity of inputs,
4. Risk protection (insurance),
5. Agricultural credit. 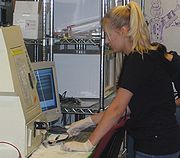 In addition to increasing crop yields agronomic biotechnology is increasingly being applied for novel uses other than food. For example, oilseed is at present used mainly for margarine and other food oils, but it can be modified to produce fatty acids for detergents, substitute fuels and petrochemicals.

Agronomists study sustainable ways to make soil
Soil
Soil is a natural body consisting of layers of mineral constituents of variable thicknesses, which differ from the parent materials in their morphological, physical, chemical, and mineralogical characteristics...
s more productive and profitable. They classify soils and reproduce them to determine whether they contain substances vital to plant growth such as compounds of nitrogen
Nitrogen
Nitrogen is a chemical element that has the symbol N, atomic number of 7 and atomic mass 14.00674 u. Elemental nitrogen is a colorless, odorless, tasteless, and mostly inert diatomic gas at standard conditions, constituting 78.08% by volume of Earth's atmosphere...
, phosphorus
Phosphorus
Phosphorus is the chemical element that has the symbol P and atomic number 15. A multivalent nonmetal of the nitrogen group, phosphorus as a mineral is almost always present in its maximally oxidized state, as inorganic phosphate rocks...
, and potassium
Potassium
Potassium is the chemical element with the symbol K and atomic number 19. Elemental potassium is a soft silvery-white alkali metal that oxidizes rapidly in air and is very reactive with water, generating sufficient heat to ignite the hydrogen emitted in the reaction.Potassium and sodium are...
. If a certain soil is deficient in these substances, fertilizers may provide them. Soil science also involves investigation of the movement of nutrients through the soil, the amount of nutrients absorbed by a plant's roots, and the development of roots and their relation to the soil.

In addition, agronomists develop methods to preserve the soil and to decrease the effects of erosion
Erosion
Erosion is when materials are removed from the surface and changed into something else. It only works by hydraulic actions and transport of solids in the natural environment, and leads to the deposition of these materials elsewhere...
by wind and water. For example, a technique called contour plowing
Contour plowing
Contour plowing or contour farming is the farming practice of plowing across a slope following its elevation contour lines. The rows formed slow water run-off during rainstorms to prevent soil erosion and allow the water time to settle into the soil...
may be used to prevent soil erosion and conserve rainfall. Researchers in agronomy also seek ways to use the soil more effectively in solving other problems. Such problems include the disposal of human and animal wastes; water pollution
Water pollution
Water pollution is the contamination of water bodies . Water pollution occurs when pollutants are discharged directly or indirectly into water bodies without adequate treatment to remove harmful compounds....
; and the build-up in the soil of pesticide
Pesticide
Pesticides are substances or mixture of substances intended for preventing, destroying, repelling or mitigating any pest.A pesticide may be a chemical unicycle, biological agent , antimicrobial, disinfectant or device used against any pest...
s. No-tilling
Tilling
Tilling can mean:* Tilling * TILLING * Tilling is a fictional town in the Mapp and Lucia novels of E. F. Benson....
crops is a technique now used to help prevent erosion.
Planting of soil binding grasses along contours can be tried in steep slopes. For better effect, contour drains of depths up to 1 metre may help retain the soil and prevent permanent wash off.

Agroecology
Agroecology
Agroecology is the application of ecological principles to the production of food, fuel, fiber, and pharmaceuticals. The term encompasses a broad range of approaches, and is considered "a science, a movement, [and] a practice."...
is the management of agricultural systems with an emphasis on ecological and environmental perspectives. This area is closely associated with work in the areas of sustainable agriculture
Sustainable agriculture
Sustainable agriculture is the practice of farming using principles of ecology, the study of relationships between organisms and their environment...
, organic farming
Organic farming
Organic farming is the form of agriculture that relies on techniques such as crop rotation, green manure, compost and biological pest control to maintain soil productivity and control pests on a farm...
, alternative food systems
Food systems
The term "food system" is used frequently in discussions about nutrition, food, health, community economic development and agriculture. A food system includes all processes and infrastructure involved in feeding a population: growing, harvesting, processing, packaging, transporting, marketing,...
and the development of alternative cropping systems.

Agronomy programs are offered at colleges, universities, and specialized agricultural schools. Agronomy programs often involve classes across a range of departments including agriculture, biology, chemistry, and physiology.
They can usually take from four to twelve years. Many companies will pay an agronomist-in-training's way through college if they agree to work for them when they graduate.

Due to the continued growth of the global population—and the consequent expanding need for study of food crops and agriculture in general—the outlook for agronomy and agronomists is excellent . Past agricultural research has created higher yielding crops, crops with better resistance to pests and plant pathogens, and more effective fertilizers and pesticides. Research is still necessary, however, particularly as insects and diseases continue to adapt to pesticides and as soil fertility and water quality continue to need improvement.

Agronomists will also be needed to balance increased agricultural output with protection and preservation of soil, water, and ecosystems. They increasingly encourage the practice of sustainable agriculture by developing and implementing plans to manage pests, crops, soil fertility and erosion, and animal waste in ways that reduce the use of harmful chemicals and do little damage to farms and the natural environment.

Agronomists career options are expanding rapidly with possible ties with golf landscaping including topsoil analysis and drainage conditions. They often work in conjunction with landscape architects and engineers to determine the best soil qualities/conditions to suit the site specifications.