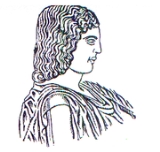 Encyclopedia
The Agricultural University of Athens is located in Athens
Athens
Athens , is the capital and largest city of Greece. Athens dominates the Attica region and is one of the world's oldest cities, as its recorded history spans around 3,400 years. Classical Athens was a powerful city-state...
, at the neighborhood of Votanikos
Votanikos
Votanikos is a subdivision located 3 km west of the downtown part of the Greek capital of Athens. The area is named after a nearby botanical garden situated to the southwest . The eastern part are residential, the western part are forested and industrialized. The subdivision has no squares but...
.

The University is located on the alluvian plain of the Kifisos river
Cephissus (Athenian plain)
Cephissus , Kifissós) or Cephisus Kifisos), a river flowing through the Athenian plain.In his summary of Greek mythology Apollodorus declares that Erechtheus' wife Praxithea was daughter of Phrasimus by Diogenia daughter of Cephissus.This river is found in the western part of the...
. Its address is 75 Iera Odos. It is bordered by Kavalas avenue, Spyrou Patsi Street, the bus depot of AUTO, and the FAGE factory. To its east lies the ancient cemetery of Kerameikos and to the west was the location of Plato's olive, whose remains are exhibited inside the main building of the University. The site is located in two by the Iera Odos (Sacred Way) which connects Athens
Athens
Athens , is the capital and largest city of Greece. Athens dominates the Attica region and is one of the world's oldest cities, as its recorded history spans around 3,400 years. Classical Athens was a powerful city-state...
and Eleusis.

The plain where the University is located was created by the perioding flooding of the Kifisos river. In antiquity the district of Elaionas (olive grove in Greek) where the university is located was considered among the healthiest of Athens. The largest part of the site where the university is located was appropriated by Hadji Ali Haseki, an 18th century Ottoman ruler of Albanian origin of Athens and used as his personal farm. From his time survives one building on the University which is one of the very few of that time that still stands in Athens
Athens
Athens , is the capital and largest city of Greece. Athens dominates the Attica region and is one of the world's oldest cities, as its recorded history spans around 3,400 years. Classical Athens was a powerful city-state...
, though not in its original condition. After the 1821 revolution the plot was confiscated along with the rest of Turkish property of Greece and became the Ruf National Farm. In 1888, after the national benefactor Triantifillides donated money to create three post-secondary schools of Agriculture, one of them was created on the site. By some this is considered as the founding of the University. Others though consider 1920 as the founding date, when the 4 year Athens College of Agriculture was founded by law submitted to parliament by Eleftherios Venizelos
Eleftherios Venizelos
Eleftherios Venizelos was an eminent Greek revolutionary, a prominent and illustrious statesman as well as a charismatic leader in the early 20th century. Elected several times as Prime Minister of Greece and served from 1910 to 1920 and from 1928 to 1932...
. No matter which date is used it is still the fourth oldest University of Greece, after the University of Athens, the National Technical University of Athens
National Technical University of Athens
The National Technical University of Athens , sometimes simply known as Athens Polytechnic, is among the oldest and most prestigious higher education institutions of Greece....
and the Athens University of Economics and Business.

The college was the first agricultural research facility in Greece. As its Greek name shows (Ανωτάτη Γεωπονική Σχολή Αθηνών) the college was originally modeled after the French Grandes Ecoles
Grandes écoles
The grandes écoles of France are higher education establishments outside the main framework of the French university system. The grandes écoles select students for admission based chiefly on national ranking in competitive written and oral exams...
. First rector was Spyridon Hasiotis who is considered the father of agricultural science in Greece. In the early years the college lacked financial resources (a problem that still plagues education in Greece) and teaching facilities. In order to help overcome this problem a special fund was set up in 1928. The main income of the University was from the sale of its produce, while the buildings of the Triantafillideios School of Agriculture were inadequate for the needs of a College. At that time the university was under the auspices of the Ministry of Agriculture which guaranteed employment to all of its graduates, thus making the university very attractive to people of poor background. Students and faculty were involved in politics, something that the Metaxas dictatorship did not like and thus moved the College to the Thessaloniki
Thessaloniki
Thessaloniki , historically also known as Thessalonica, Salonika or Salonica, is the second-largest city in Greece and the capital of the region of Central Macedonia as well as the capital of the Decentralized Administration of Macedonia and Thrace...
in 1937, to become part of the Aristotle University of Thessaloniki
Aristotle University of Thessaloniki
The Aristotle University of Thessaloniki is the largest Greek university, and the largest university in the Balkans. It was named after the philosopher Aristotle, who was born in Stageira, Chalcidice, about 55 km east of Thessaloniki, in Central Macedonia...
.

In Thessaloniki the situation was tougher, since all the work that had been done to improve the site was now useless, due to relocation. After repeated pleads the Occupation Government allowed the return of the College in Athens, but did not abolish the Agriculture Faculty of the Aristotle University which thus exists to this day, as the Faculty of Geotechnical Sciences of the Aristotle University of Thessaloniki.

Upon return the Students and the Faculty found the installations under bad conditions. Also half the material was left in Thessaloniki to help continue the Faculty there. At least though during the occupation, a time when over 300,000 Greeks died of hunger the fields of the University provided food for the student and faculty. The great famine of World War II
World War II
World War II, or the Second World War , was a global conflict lasting from 1939 to 1945, involving most of the world's nations—including all of the great powers—eventually forming two opposing military alliances: the Allies and the Axis...
gave a sense of urgency to the University's founding mission: to help Greece obtain self-sufficiency in food. To improve the level of education a fifth year was added in 1948 as specialization. 1948 is considered the beginning of the post-war era with the foundation of the central building.

The six (or seven) current Departments were thus formed in 1990, which shared the largest part of the curriculum in the first three years and provided specialisation the last two. Over time though the programmes have drifted more and more apart, thus leading to the plan of complete separation between the departments in curriculum by 2010, but also thus stripping the title of agricultural engineer to everyone except alumni of the Departments of Plant Science and Animal Science. This is currently being debated at the University and decision has not been reached.

The University is divided into seven Departments