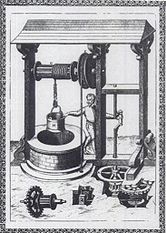 Agostino Ramelli is a unitary parliamentary republic in South-Central Europe. To the north it borders France, Switzerland, Austria and...
– 1600) was an engineer
Engineer
An engineer is a professional practitioner of engineering, concerned with applying scientific knowledge, mathematics and ingenuity to develop solutions for technical problems. Engineers design materials, structures, machines and systems while considering the limitations imposed by practicality,...
who designed the "book wheel" or "reading wheel".

In 1588 Ramelli published a book, The Diverse and Artifactitious Machines of Captain Agostino Ramelli, of engineering designs including many pumps and a possible forerunner to the Wankel engine
Wankel engine
The Wankel engine is a type of internal combustion engine using an eccentric rotary design to convert pressure into a rotating motion instead of using reciprocating pistons. Its four-stroke cycle takes place in a space between the inside of an oval-like epitrochoid-shaped housing and a rotor that...
. This book is still printed and sold.

His "book wheel" presented volumes of text to readers in whatever position they had last placed them, and thus it is considered an early prototype of hypertext
Hypertext
Hypertext is text displayed on a computer or other electronic device with references to other text that the reader can immediately access, usually by a mouse click or keypress sequence. Apart from running text, hypertext may contain tables, images and other presentational devices. Hypertext is the...
and hence the World Wide Web
World Wide Web
The World Wide Web is a system of interlinked hypertext documents accessed via the Internet...
.
The source of this article is wikipedia, the free encyclopedia.  The text of this article is licensed under the GFDL.