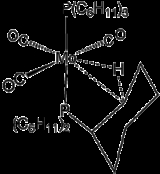 Encyclopedia
Agostic interaction is a term in organometallic chemistry
Organometallic chemistry
Organometallic chemistry is the study of chemical compounds containing bonds between carbon and a metal. Since many compounds without such bonds are chemically similar, an alternative may be compounds containing metal-element bonds of a largely covalent character...
for the interaction of a coordinately-unsaturated transition metal
Transition metal
The term transition metal has two possible meanings:*The IUPAC definition states that a transition metal is "an element whose atom has an incomplete d sub-shell, or which can give rise to cations with an incomplete d sub-shell." Group 12 elements are not transition metals in this definition.*Some...
with a C-H bond
Carbon-hydrogen bonds
The C−H bond is a bond between carbon and hydrogen atoms, most commonly found in organic compounds. Carbon–hydrogen bonds have a bond length of about 1.09 Å and a bond energy of about 413 kJ/mol . Using Pauling's scale—C and H —the electronegativity difference between these two atoms is 0.4...
, when the two electrons involved in the C-H bond enter the empty d-orbital of a transition metal, resulting in a three-center two-electron bond
Three-center two-electron bond
A three-center two-electron bond is an electron-deficient chemical bond where three atoms share two electrons. The combination of three atomic orbitals form three molecular orbitals: one bonding, one non-bonding, and one anti-bonding. The two electrons go into the bonding orbital, resulting in a...
. Many catalytic transformations, e.g. oxidative addition
Oxidative addition
Oxidative addition and reductive elimination are two important and related classes of reactions in organometallic chemistry. Oxidative addition is a process that increases both the oxidation state and coordination number of a metal centre...
and reductive elimination, are proposed to proceed via intermediates featuring agostic interactions. Agostic interactions are observed throughout organometallic chemistry in alkyl, alkylidene, and polyenyl ligands.

The term agostic, derived from the Greek word for "to hold close to oneself", was coined by Maurice Brookhart
Maurice Brookhart
Maurice S. Brookhart is the William R. Kenan, Jr. Professor of Chemistry in the Department of Chemistry at the University of North Carolina....
and Malcolm Green
Malcolm Green (chemist)
Malcolm Green also known as M. L. H. Green is a British Emeritus Professor of Inorganic Chemistry.Born in Eastleigh, Hampshire, he received his BSc degree from Acton Technical College in 1956 and his PhD from Imperial College of Science and Technology in 1959 under the supervision of Professor...
to describe this and many other interactions between a transition metal and a C-H bond. Often such agostic interactions involve alkyl or aryl groups that are held close to the metal center through an additional σ-bond.

Short interactions between hydrocarbon substituents and coordinatively unsaturated metal complexes have been noted since the 1960s. For example, in tris(triphenylphosphine
Triphenylphosphine
Triphenylphosphine is a common organophosphorus compound with the formula P3 - often abbreviated to PPh3 or Ph3P. It is widely used in the synthesis of organic and organometallic compounds. PPh3 exists as relatively air stable, colorless crystals at room temperature...
) ruthenium dichloride, a short interaction is observed between the ruthenium
Ruthenium
Ruthenium is a chemical element with symbol Ru and atomic number 44. It is a rare transition metal belonging to the platinum group of the periodic table. Like the other metals of the platinum group, ruthenium is inert to most chemicals. The Russian scientist Karl Ernst Claus discovered the element...
(II) center and a hydrogen atom on the ortho position of one of the nine phenyl rings. Numerous borohydride complexes were also described crystallographically that were described using the two-electron three-center bonding model. 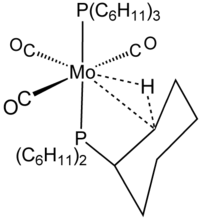 Agostic interactions are best demonstrated by crystallography
Crystallography
Crystallography is the experimental science of the arrangement of atoms in solids. The word "crystallography" derives from the Greek words crystallon = cold drop / frozen drop, with its meaning extending to all solids with some degree of transparency, and grapho = write.Before the development of...
. Neutron diffraction
Neutron diffraction
Neutron diffraction or elastic neutron scattering is the application of neutron scattering to the determination of the atomic and/or magnetic structure of a material: A sample to be examined is placed in a beam of thermal or cold neutrons to obtain a diffraction pattern that provides information of...
data has shown that C-H and M-H bond distances are 5-20% longer than expected for isolated metal hydride and hydrocarbons. The distance between the metal and the hydrogen is typically 1.8 - 2.3 Ǻ, and the M-H-C angle falls in the range 90 - 140°. The presence of a 1H NMR
NMR
NMR may refer to:Applications of Nuclear Magnetic Resonance:* Nuclear magnetic resonance* NMR spectroscopy* Solid-state nuclear magnetic resonance* Protein nuclear magnetic resonance spectroscopy* Proton NMR* Carbon-13 NMR...
signal that is shifted upfield from that of a normal aryl or alkane, often to the region normally assigned to hydride
Hydride
In chemistry, a hydride is the anion of hydrogen, H−, or, more commonly, a compound in which one or more hydrogen centres have nucleophilic, reducing, or basic properties. In compounds that are regarded as hydrides, hydrogen is bonded to a more electropositive element or group...
ligands. The coupling constant 1JCH is typically lowered to 70-100 Hz versus the 125 Hz expected for a normal sp3 carbon-hydrogen bond.

On the basis of experimental and computational
Computational chemistry
Computational chemistry is a branch of chemistry that uses principles of computer science to assist in solving chemical problems. It uses the results of theoretical chemistry, incorporated into efficient computer programs, to calculate the structures and properties of molecules and solids...
studies, the stabilization arising from an agostic interaction is estimated to be 10–15 kcal/mol. Thus, agostic interactions are stronger than most hydrogen bond
Hydrogen bond
A hydrogen bond is the attractive interaction of a hydrogen atom with an electronegative atom, such as nitrogen, oxygen or fluorine, that comes from another molecule or chemical group. The hydrogen must be covalently bonded to another electronegative atom to create the bond...
s. Agostic bonds sometimes play a role in catalysis by increasing 'rigidity' in transition states. For instance, in Ziegler-Natta catalysis the highly electrophilic metal center has agostic interactions with the growing polymer chain. This increased rigidity influences the stereoselectivity of the polymerization process.

The term agostic is reserved to describe two-electron, three-center bonding interactions between carbon, hydrogen, and a metal. Two-electron three-center bonding is clearly implicated in the complexation of H2, e.g., in W(CO)3(PCy3)2H2, which is closely related to the agostic complex shown in the figure. Silane
Silane
Silane is a toxic, extremely flammable chemical compound with chemical formula SiH4. In 1857, the German chemists and Friedrich Woehler discovered silane among the products formed by the action of hydrochloric acid on aluminum silicide, which they had previously prepared...
binds to metal centers often via agostic-like, three-centered Si-H-M interactions. Because these interactions do not include carbon, however, they are not classified as agostic.

Agostic interactions serve a key function in olefin polymerization and stereochemistry, as well as migratory insertion
Migratory insertion
A migratory insertion is a type of reaction in organometallic chemistry wherein two ligands on a metal complex combine. It is a subset of reactions that very closely resembles the insertion reactions, and both are differentiated by the mechanism that leads to the resulting stereochemistry of the...
.
The source of this article is wikipedia, the free encyclopedia.  The text of this article is licensed under the GFDL.