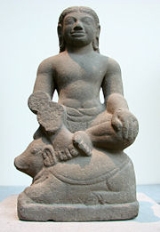 Encyclopedia
Agni is a Hindu deity
Rigvedic deities
There are 1028 hymns in the Rigveda, most of them dedicated to specific deities.Indra, a heroic god, slayer of Vrtra and destroyer of the Vala, liberator of the cows and the rivers; Agni the sacrificial fire and messenger of the gods; and Soma the ritual drink dedicated to Indra are the most...
, one of the most important of the Vedic gods. He is the god of fire and the acceptor of sacrifices. The sacrifices made to Agni go to the deities
Deity
A deity is a recognized preternatural or supernatural immortal being, who may be thought of as holy, divine, or sacred, held in high regard, and respected by believers....
because Agni is a messenger from and to the other gods. He is ever-young, because the fire is re-lit every day, and also immortal.

Agni, the Vedic god of fire, has two heads, one marks immortality and the other marks an unknown symbol of life has made the transition into the Hindu pantheon of gods, without losing his importance. With Varuna
Varuna
In Vedic religion, Varuna is a god of the sky, of water and of the celestial ocean, as well as a god of law and of the underworld...
and Indra
Indra
' or is the King of the demi-gods or Devas and Lord of Heaven or Svargaloka in Hindu mythology. He is also the God of War, Storms, and Rainfall.Indra is one of the chief deities in the Rigveda...
he is one of the supreme gods in the Rig Veda. The link between heaven and earth, the deities and the humans, he is associated with Vedic sacrifice, taking offerings to the other world in his fire. In Hinduism, his vehicle is the ram.

The word agni is Sanskrit
Sanskrit
Sanskrit , is a historical Indo-Aryan language and the primary liturgical language of Hinduism, Jainism and Buddhism.Buddhism: besides Pali, see Buddhist Hybrid Sanskrit Today, it is listed as one of the 22 scheduled languages of India and is an official language of the state of Uttarakhand...
for "fire" (noun), cognate with Latin
Latin
Latin is an Italic language originally spoken in Latium and Ancient Rome. It, along with most European languages, is a descendant of the ancient Proto-Indo-European language. Although it is considered a dead language, a number of scholars and members of the Christian clergy speak it fluently, and...
ignis (the root of English ignite), Russian огонь (ogon), Polish "ogień", and Lithuanian ugnis—all with the meaning "fire", with the reconstructed Proto-Indo-European root being h₁égni-. Agni has three forms: fire, lightning and the sun.

Agni is the first word of the first hymn of the Rigveda
Rigveda
The Rigveda is an ancient Indian sacred collection of Vedic Sanskrit hymns...
:

Agni I laud, the high priest, god
Deva (Hinduism)
' is the Sanskrit word for god or deity, its related feminine term is devi. In modern Hinduism, it can be loosely interpreted as any benevolent supernatural beings. The devs in Hinduism, also called Suras, are often juxtaposed to the Asuras, their half brothers. Devs are also the maintainers of...
, minister of sacrifice, The invoker, lavishest of wealth.

He is the supreme director of religious ceremonies and duties, and figures as messenger between mortals and gods. Vedic rituals all involve Agni, for example the elaborate Agnicayana
Agnicayana
The Atiratra Agnicayana or Athirathram ; the piling of the altar of Agni is a Śrauta ritual of the Vedic religion, the predecessor of modern day Hinduism which is considered to be the greatest ritual as per the Vedic ritual hierarchy. It is also the world's oldest surviving ritual...
, that is, the piling of the fire altar, the Agnihotra
Agnihotra
Agnihotra is a Vedic yajña performed in orthodox Hindu communities. It is mentioned in the Atharvaveda and described in detail in the Yajurveda Samhita and the Shatapatha Brahmana . The Vedic form of the ritual is still performed Nambudiri Brahmins of Kerala and by a small number of Vaidiki...
, viz., offering to Agni.

The Rigveda
Rigveda
The Rigveda is an ancient Indian sacred collection of Vedic Sanskrit hymns...
often says that Agni arises from water or dwells in the waters. He may have originally been the same as Apam Napat
Apam Napat
Apam Napat is an eminent figure of the Indo-Iranian pantheon. In Hinduism, Apām Napāt is the god of fresh water, such as in rivers and lakes...
, who is also sometimes described as fire arising from water which in a natural explanation may have referred to flames from natural gas or oil seepages surfacing through water. Other Rigvedic names, epithets or aspects of Agni include Matarishvan, Jatavedas, or Bharata.

Agni, god of fire acts as the divine model for the sacrificial priest. He is the messenger who carries the oblation from humans to the gods, bringing the gods to sacrifice, and interceding between gods and humans (RgV.1.26.3). When Agni is pleased, the gods are generous. Agni represents the cultivated, cooked and cultured aspects of Vedic ritual. Together with Soma, Agni is invoked in the Rig Veda more than any other gods.

In a later Hindu interpretation, Agni stands for knowledge
Knowledge
Knowledge is a familiarity with someone or something unknown, which can include information, facts, descriptions, or skills acquired through experience or education. It can refer to the theoretical or practical understanding of a subject...
for it is seen by the learned people, covering all things that move and do not move and because it summons the Devatas
Devatas
Deva is the Hindu term for deity; devatas , are a kind of smaller more focused devas, the equivalent of guardian spirits or guardian angels. The term "devata" also means devas . They are male and female devata...
endowed with knowledge the light Agni emits is the light of knowledge. Therefore, it is also known as the illuminator of knowledge who lights up the path leading to Truth. Agni reveals the true nature of one's own self
Self (spirituality)
Religious views on the self vary widely. The self is a complex and core subject in many forms of spirituality. Two types of self are commonly considered - the self that is the ego, also called the learned, superficial self of mind and body, "false self", an egoic creation, and the Self which is...
because it is the innermost light that shines ever so brightly in all things living and nonliving as their inner consciousness (impeller).

In Hindu scriptures, Agni is depicted with two or seven hands, two heads and three legs. He has seven fiery tongues with which he licks sacrificial butter. He rides a ram or in a chariot harnessed by fiery horses. His attributes are an axe, torch, prayer beads and a flaming spear.

Agni is represented as red and two-faced, suggesting both his destructive and beneficent qualities, and with black eyes and hair, three legs and seven arms. He rides a ram, or a chariot pulled by goats or, more rarely, parrots. Seven rays
Seven Rays
The seven rays is an occult concept that has appeared in several religions and esoteric philosophies, since at least the 6th century BCE, of the Aryan peoples in both Western culture and in India...
of light emanate from his body. One of his names is Saptajihva, "having seven tongues". Another one of his epithets is Abhimani (from Sanskrit: abhi towards + the verbal root man to think, reflect upon) meaning dignified, proud; Longing for, thinking upon.

Agni is the eldest son of Brahma
Brahma
Brahma is the Hindu god of creation and one of the Trimurti, the others being Vishnu and Shiva. According to the Brahma Purana, he is the father of Mānu, and from Mānu all human beings are descended. In the Ramayana and the...
. In Visnu Purana, Agni (Abhimani) the fire god is said to have sprung from the mouth of the Virat purusha
Purusha
In some lineages of Hinduism, Purusha is the "Self" which pervades the universe. The Vedic divinities are interpretations of the many facets of Purusha...
, the Cosmic Man. His wife is Svaha. Abhimani had three sons of surpassing brilliancy: Pavaka, Pavamana, and Suchi, the personifications of the three fires that produced our earth and humanity (VP 1:10). All these three names indicate purity. Abhimanin, his three sons, and their 45 sons constitute the mystic 49 fires of the Puranas and theosophy. (cf Agni Purana
Agni Purana
The Agni Purana, one of the 18 Mahapuranas, a genre of Hindu religious texts, contains descriptions and details of various incarnations of Vishnu. It also has details account about Rama, Krishna, Prithvi, and the stars...
.)

His three sons, according to the Vayu Purana
Vayu Purana
The Vayu Purana is a Shaiva Purana, a Hindu religious text, dedicated to the god Vayu , containing about 24,000 shlokas.-Date:Banabhatta refers to this work in his Kadambari and Harshacharita...
, stand for three different aspects of Agni (fire): Pavaka is the electric fire, Pavamana the fire produced by friction, and Suchi the solar fire. Interpreted on the cosmic and human planes, these three fires are "Spirit, Soul, and Body, the three great Root groups, with their four additional divisions" (SD 2:247). They are said to have been cursed by the sage Vasishtha to be born again and again (cf BP 4:24,4; SD 2:247-8). "Every fire has a distinct function and meaning in the worlds of the physical and the spiritual. It has, moreover, in its essential nature a corresponding relation to one of the human psychic faculties, besides its well determined chemical and physical potencies when coming in contact with the terrestrially differentiated matter" (SD 1:521).

Agni is also an important entity in Ayurveda
Ayurveda
Ayurveda or ayurvedic medicine is a system of traditional medicine native to India and a form of alternative medicine. In Sanskrit, words , meaning "longevity", and , meaning "knowledge" or "science". The earliest literature on Indian medical practice appeared during the Vedic period in India,...
. It is considered to be the one which is responsible for the sustenance of life. Agni helps in the various physiological functions of the body.

In some Hindu symbolism, Agni's parents are said to be the two components of the firedrill used to start the fire, and when young he was said to be cared for by ten servants, which represent the fingers of the man who is starting the fire. 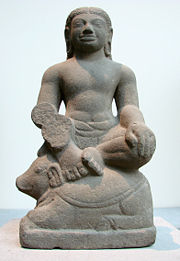 In Newar, Tibetan and Japanese Buddhism
Buddhism
Buddhism is a religion and philosophy encompassing a variety of traditions, beliefs and practices, largely based on teachings attributed to Siddhartha Gautama, commonly known as the Buddha . The Buddha lived and taught in the northeastern Indian subcontinent some time between the 6th and 4th...
, he is a lokapāla guarding the Southeast. Jigten lugs kyi bstan bcos: which translates, "Make your hearth in the southeast corner of the house, which is the quarter of Agni". He also plays a central role in most Buddhist homa fire-puja rites. A typical praise to Agni starts "Son of Brahma, Lord of the World, King of fire gods empowered by Takki, Whose supreme wisdom burns all delusion [...]"
The source of this article is wikipedia, the free encyclopedia.  The text of this article is licensed under the GFDL.