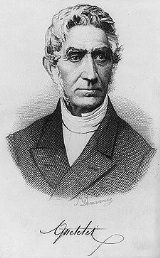 Overview
Lambert Adolphe Jacques Quetelet (22 February 1796 – 17 February 1874) was a Belgian
Demographics of Belgium
This article is about the demographic features of the population of Belgium, including ethnicity, education level, health of the populace, economic status, religious affiliations and other aspects of the population...
astronomer
Astronomer
An astronomer is a scientist who studies celestial bodies such as planets, stars and galaxies.Historically, astronomy was more concerned with the classification and description of phenomena in the sky, while astrophysics attempted to explain these phenomena and the differences between them using...
, mathematician
Mathematician
A mathematician is a person whose primary area of study is the field of mathematics. Mathematicians are concerned with quantity, structure, space, and change....
, statistician
Statistician
A statistician is someone who works with theoretical or applied statistics. The profession exists in both the private and public sectors. The core of that work is to measure, interpret, and describe the world and human activity patterns within it...
and sociologist. He founded and directed the Brussels Observatory and was influential in introducing statistical methods to the social sciences. His name is sometimes spelled with an accent as Quételet.
Adolphe was born in Ghent
Ghent
Ghent is a city and a municipality located in the Flemish region of Belgium. It is the capital and biggest city of the East Flanders province. The city started as a settlement at the confluence of the Rivers Scheldt and Lys and in the Middle Ages became one of the largest and richest cities of...
, Belgium
Belgium
Belgium , officially the Kingdom of Belgium, is a federal state in Western Europe. It is a founding member of the European Union and hosts the EU's headquarters, and those of several other major international organisations such as NATO.Belgium is also a member of, or affiliated to, many...
, the son of François-Augustin-Jacques-Henri Quetelet, a Frenchman and Anne Françoise Vandervelde, a Belgian.