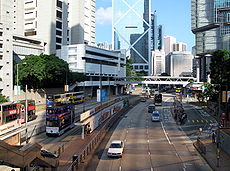 Admiralty is the eastern extension of central business district
Central business district
A central business district is the commercial and often geographic heart of a city. In North America this part of a city is commonly referred to as "downtown" or "city center"...
of the Central
Central, Hong Kong
Central is the central business district of Hong Kong. It is located in Central and Western District, on the north shore of Hong Kong Island, across Victoria Harbour from Tsim Sha Tsui, the southernmost point of Kowloon Peninsula...
on the Hong Kong Island
Hong Kong Island
Hong Kong Island is an island in the southern part of the Hong Kong Special Administrative Region. It has a population of 1,289,500 and its population density is 16,390/km², as of 2008...
of Hong Kong
Hong Kong
Hong Kong is one of two Special Administrative Regions of the People's Republic of China , the other being Macau. A city-state situated on China's south coast and enclosed by the Pearl River Delta and South China Sea, it is renowned for its expansive skyline and deep natural harbour...
. It is located on the eastern end of the Central and Western District
Central and Western District
The Central and Western District located on northern part of Hong Kong Island is one of the 18 administrative districts of Hong Kong. It had a population of 261,884 in 2001...
, bordered by Wan Chai
Wan Chai
Wan Chai is a metropolitan area situated at the western part of the Wan Chai District on the northern shore of Hong Kong Island, in Hong Kong. Its other boundaries are Canal Road to the east, Arsenal Street to the west and Bowen Road to the south. The area north of Gloucester Road is often called...
to the east and Victoria Harbour
Victoria Harbour
Victoria Harbour is a natural landform harbour situated between Hong Kong Island and the Kowloon Peninsula in Hong Kong. The harbour's deep, sheltered waters and strategic location on the South China Sea were instrumental in Hong Kong's establishment as a British colony and its subsequent...
to the north. The name of Admiralty refers to the former Admiralty Dock in the area which housed a naval dockyard. The dock was later demolished when land was reclaimed and developed northward as the HMS Tamar
HMS Tamar (shore station)
HMS Tamar was the name for the Royal Navy's base in Hong Kong from 1897 to 1997. It took its name from HMS Tamar a ship that was used as the base until replaced by buildings ashore.-19th Century:...
naval base. The Chinese name, Kam-chung (金鐘), lit. Golden Bell, refers to a golden bell
Bell (instrument)
A bell is a simple sound-making device. The bell is a percussion instrument and an idiophone. Its form is usually a hollow, cup-shaped object, which resonates upon being struck...
once housed at the dock.

The area was chosen to military area by British military
British Army
The British Army is the land warfare branch of Her Majesty's Armed Forces in the United Kingdom. It came into being with the unification of the Kingdom of England and Scotland into the Kingdom of Great Britain in 1707. The new British Army incorporated Regiments that had already existed in England...
. They built Wellington Barracks
Wellington Barracks, Hong Kong
Wellington Barracks was a British Army barracks in Admiralty of Central on the north side of Hong Kong Island in Hong Kong. The three storey Classical architecture building was built in 1854. The barracks had an army hospital, and this still exists as Hong Kong International School. The barracks...
, Murray Barracks
Murray Barracks
Murray Barracks was a barracks for British Army in Admiralty of Central in Hong Kong. It was named after Sir George Murray, the Master-General of the Ordnance at the time of construction.-Location:...
, Victoria Barracks
Victoria Barracks, Hong Kong
The Victoria Barracks were a barracks in the Admiralty district of Central on Hong Kong Island, Hong Kong. The barracks were constructed between the 1840s and 1874, and situated within the area bounded by Cotton Tree Drive, Kennedy Road and Queensway, Hong Kong. The Barracks with Murray Barracks,...
and Admiralty Dock at the site.

The area split the urban area on the north shore of Hong Kong Island. The Hong Kong Government had tried many times to get the land from the British military to connect the two urban areas, but the military refused. It was not until the 1970s that the land was gradually returned to government and changed to commercial buildings and gardens.

The Admiralty Station
Admiralty (MTR)
Admiralty station is an MTR station located on Hong Kong Island, in an area often referred to as Admiralty. The station's livery is dodger blue...
of MTR
MTR
Mass Transit Railway is the rapid transit railway system in Hong Kong. Originally opened in 1979, the system now includes 211.6 km of rail with 155 stations, including 86 railway stations and 69 light rail stops...
was built on the former site of the Hong Kong dockyards which was built in 1878 and demolished in the 1970s. After completion, the area became increasingly known as Admiralty, rather than Central.

Pacific Place
Pacific Place
Pacific Place is a complex of office towers, hotels and a shopping centre situated at 88 Queensway, in Admiralty, Hong Kong. The latest phase, Three Pacific Place, is located at 1 Queen's Road East....
is a complex where a shopping mall, a number of hotel
Hotel
A hotel is an establishment that provides paid lodging on a short-term basis. The provision of basic accommodation, in times past, consisting only of a room with a bed, a cupboard, a small table and a washstand has largely been replaced by rooms with modern facilities, including en-suite bathrooms...
s and office towers are located at. The complex is connected to the MTR Admiralty Station via an underground walkway. Queensway Plaza is a shopping centre located above Admiralty station. Other major buildings in the area include British Consulate General Hong Kong
British Consulate-General, Hong Kong
The British Consulate-General Hong Kong, located at 1 Supreme Court Road, Admiralty on Hong Kong Island, is the largest British consulate-general and is bigger than many British embassies and high commissions abroad...
, Admiralty Centre, United Centre, Far East Financial Centre, CITIC Tower
CITIC Tower
CITIC Tower is an office building on Tim Mei Avenue, Admiralty, Hong Kong. It is the corporate headquarters of CITIC Pacific Ltd, a conglomerate publicly traded on the Hong Kong Stock Exchange and listed on the Hang Seng Index, and also a subsidiary of the CITIC Group.This 33-storey prestigious...
, and the Lippo Centre Towers.

The High Court and Hong Kong Park
Hong Kong Park
The Hong Kong Park is a public park next to Cotton Tree Drive in Central, Hong Kong. Built at a cost of HK$398 million and opened in May 1991, it covers an area of 80,000 m² and is an example of modern design and facilities blending with natural landscape....
are located south of Queensway.