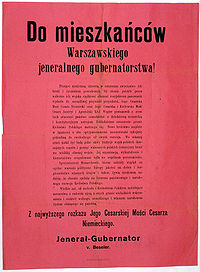 The Act of 5th November of 1916 was a declaration of Emperors Wilhelm II of Germany and Franz Joseph of Austria. This act promised the creation of the Kingdom of Poland, envisioned by its authors as a puppet state allied to and controlled by the Central Powers
Central Powers
The Central Powers were one of the two warring factions in World War I , composed of the German Empire, the Austro-Hungarian Empire, the Ottoman Empire, and the Kingdom of Bulgaria...
. The origin of that document was the dire need to draft new recruits from German-occupied Poland for the war with Russia.