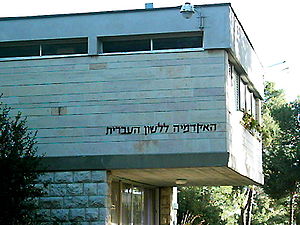 The Academy of the Hebrew Language was established by the Israel
Israel
The State of Israel is a parliamentary republic located in the Middle East, along the eastern shore of the Mediterranean Sea...
i government in 1953 as the "supreme institution for scholarship on the Hebrew language."

The Academy replaced the Hebrew Language Committee (Vaʻad ha-lashon ha-ʻIvrit) established in 1890. It is responsible for creating new Hebrew
Hebrew language
Hebrew is a Semitic language of the Afroasiatic language family. Culturally, is it considered by Jews and other religious groups as the language of the Jewish people, though other Jewish languages had originated among diaspora Jews, and the Hebrew language is also used by non-Jewish groups, such...
words to keep up modern usage. Although the academy's business is creating new words from Hebrew roots and structures to replace loanwords derived from other languages, its own name is a loanword, "akademya." The Academy sets standards for modern Hebrew grammar, orthography, transliteration, and punctuation based on the historical development of the language.