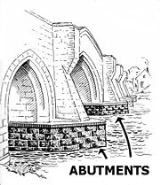 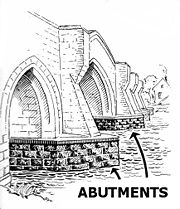 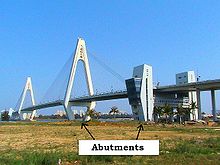 An abutment is, generally, the point where two structures or objects meet. This word comes from the verb abut, which means adjoin or having common boundary. An abutment is an engineering term that describes a structure located at the ends of a bridge, where the bridge slab adjoins the approaching roadway. This structure is basically a retaining wall designed to carry the loading conditions present in bridge structures.

Specifically, an abutment may be:

In architecture an abutment is formed of "solid masonry placed to resist the lateral pressure of a vault" (Nikolaus Pevsner).

An abutment supports the ends of a bridge
Bridge
A bridge is a structure built to span physical obstacles such as a body of water, valley, or road, for the purpose of providing passage over the obstacle...
superstructure
Superstructure
A superstructure is an upward extension of an existing structure above a baseline. This term is applied to various kinds of physical structures such as buildings, bridges, or ships...
. The intermediate supports in a multi-span bridge are known as piers.

Abutments are used for the following purposes:

There are different types of abutments including:

resists horizontal earth pressure with its own dead weight

Short abutments at the top of an embankment or slope. Usually supported on piles.

Vertical buttresses with open spaces between them

Abutment is also a term used by civil engineer
Civil engineer
A civil engineer is a person who practices civil engineering; the application of planning, designing, constructing, maintaining, and operating infrastructures while protecting the public and environmental health, as well as improving existing infrastructures that have been neglected.Originally, a...
s in dam
Dam
A dam is a barrier that impounds water or underground streams. Dams generally serve the primary purpose of retaining water, while other structures such as floodgates or levees are used to manage or prevent water flow into specific land regions. Hydropower and pumped-storage hydroelectricity are...
construction
Construction
In the fields of architecture and civil engineering, construction is a process that consists of the building or assembling of infrastructure. Far from being a single activity, large scale construction is a feat of human multitasking...
; moving water from a large reservoir to a channel such as a spillway
Spillway
A spillway is a structure used to provide the controlled release of flows from a dam or levee into a downstream area, typically being the river that was dammed. In the UK they may be known as overflow channels. Spillways release floods so that the water does not overtop and damage or even destroy...
, there are smooth transition walls at both sides named abutments which minimize the water's energy loss.
The source of this article is wikipedia, the free encyclopedia.  The text of this article is licensed under the GFDL.