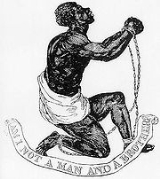 Overview
Abolitionism is a movement to end slavery
Slavery
Slavery is a system under which people are treated as property to be bought and sold, and are forced to work. Slaves can be held against their will from the time of their capture, purchase or birth, and deprived of the right to leave, to refuse to work, or to demand compensation...
.

In western Europe
Western Europe
Western Europe is a loose term for the collection of countries in the western most region of the European continents, though this definition is context-dependent and carries cultural and political connotations. One definition describes Western Europe as a geographic entity—the region lying in the...
and the Americas
Americas
The Americas, or America , are lands in the Western hemisphere, also known as the New World. In English, the plural form the Americas is often used to refer to the landmasses of North America and South America with their associated islands and regions, while the singular form America is primarily...
abolitionism was a movement to end the slave trade and set slaves free. At the behest of Dominican
Dominican Order
The Order of Preachers , after the 15th century more commonly known as the Dominican Order or Dominicans, is a Catholic religious order founded by Saint Dominic and approved by Pope Honorius III on 22 December 1216 in France...
priest Bartolomé de las Casas
Bartolomé de Las Casas
Bartolomé de las Casas O.P. was a 16th-century Spanish historian, social reformer and Dominican friar. He became the first resident Bishop of Chiapas, and the first officially appointed "Protector of the Indians"...
who was shocked at the treatment of natives in the New World, Spain enacted the first European law abolishing colonial slavery
New Laws
The New Laws, in Spanish Leyes Nuevas, issued November 20, 1542 by King Charles V of Spain regarding the Spanish colonization of the Americas, are also known as the "New Laws of the Indies for the Good Treatment and Preservation of the Indians", and were created to prevent the exploitation of the...
in 1542, although it was not to last (to 1545). In the 17th century, Quaker and evangelical religious groups condemned it as un-Christian; in the 18th century, rationalist thinkers of the Enlightenment
Age of Enlightenment
The Age of Enlightenment was an elite cultural movement of intellectuals in 18th century Europe that sought to mobilize the power of reason in order to reform society and advance knowledge. It promoted intellectual interchange and opposed intolerance and abuses in church and state...
criticized it for violating the rights of man.

what were the various attitudes held towards abolitionist in the caribbean

what did others do to keep slavery

what were the attitudes held towards the abolitionist?
More

Abolitionism proposes to destroy the right and extinguish the principle of self-grovernment for which our forefathers waged a seven years' bloody war, and upon which our whole system of free government is founded.

The Abolitionst…must see that he has neither the right or power of operating except by moral means and suasion.