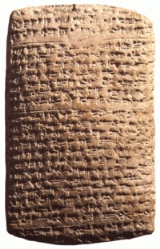 Encyclopedia
Abdi-Heba was a local chieftain of Jerusalem during the Amarna
Amarna
Amarna is an extensive Egyptian archaeological site that represents the remains of the capital city newly–established and built by the Pharaoh Akhenaten of the late Eighteenth Dynasty , and abandoned shortly afterwards...
period (mid-1330s BC). Abdi-Heba's name can be translated as "servant of Hebat
Hebat
Hebat, also transcribed Kheba or Khepat, was the mother goddess of the Hurrians, known as "the mother of all living".- Family :Hebat is the consort of Teshub and the mother of Sarruma. Originally, as Kheba or "Kubau" it is thought she may have had a Southern Mesopotamian origin, being the divinised...
", a Hurrian goddess
Goddess
A goddess is a female deity. In some cultures goddesses are associated with Earth, motherhood, love, and the household. In other cultures, goddesses also rule over war, death, and destruction as well as healing....
. Some scholars believe the correct reading is Ebed-Nob. Whether Abdi-Heba was himself of Hurrian descent is unknown, as is the relationship between the general populace of pre-Israelite
Israelite
According to the Bible the Israelites were a Hebrew-speaking people of the Ancient Near East who inhabited the Land of Canaan during the monarchic period .The word "Israelite" derives from the Biblical Hebrew ישראל...
Jerusalem (called, several centuries later, Jebusites in the Bible) and the Hurrians. Egyptian documents have him deny he was a ḫazānu (mukhtar
Mukhtar
Mukhtar meaning "chosen" in Arabic, refers to the head of a village or mahalle in many Arab countries as well as in Turkey and Cyprus. The name refers to the fact that mukhtars are usually selected by some consensual or participatory method, often involving an election. Mukhtar is also a common...
) and assert he is a soldier (we'w), the implication being he was the son of a local chief sent to Egypt to receive military training there. 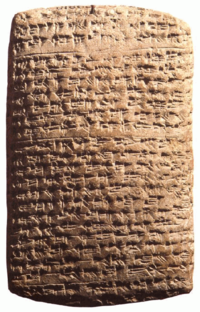 Also unknown is whether he was part of a dynasty that governed Jerusalem or whether he was put on the throne by the Egyptians
Ancient Egypt
Ancient Egypt was an ancient civilization of Northeastern Africa, concentrated along the lower reaches of the Nile River in what is now the modern country of Egypt. Egyptian civilization coalesced around 3150 BC with the political unification of Upper and Lower Egypt under the first pharaoh...
. Abdi-Heba himself notes that he holds his position not through his parental lineage but by the grace of Pharaoh
Pharaoh
Pharaoh is a title used in many modern discussions of the ancient Egyptian rulers of all periods. The title originates in the term "pr-aa" which means "great house" and describes the royal palace...
, but this might be flattery rather than an accurate representation of the situation. At this time the area he administered from his garrison may have had a population of fifteen hundred people and Urusalim would have been a 'small highlands stronghold' in the fourteenth century BCE with no fortifications or large buildings.

During Abdi-Heba's reign the region was under attack from marauding bands of Apiru. Abdi-Heba made frequent pleas to the Pharaoh of Egypt
Egypt
Egypt , officially the Arab Republic of Egypt, Arabic: , is a country mainly in North Africa, with the Sinai Peninsula forming a land bridge in Southwest Asia. Egypt is thus a transcontinental country, and a major power in Africa, the Mediterranean Basin, the Middle East and the Muslim world...
(probably Amenhotep III
Amenhotep III
Amenhotep III also known as Amenhotep the Magnificent was the ninth pharaoh of the Eighteenth dynasty. According to different authors, he ruled Egypt from June 1386 to 1349 BC or June 1388 BC to December 1351 BC/1350 BC after his father Thutmose IV died...
), for an army or, at least, an officer to command. Abdi-Heba also made other requests for military aid in fighting off his enemies, both Canaan
Canaan
Canaan is a historical region roughly corresponding to modern-day Israel, Palestine, Lebanon, and the western parts of Jordan...
ite warlord
Warlord
A warlord is a person with power who has both military and civil control over a subnational area due to armed forces loyal to the warlord and not to a central authority. The term can also mean one who espouses the ideal that war is necessary, and has the means and authority to engage in war...
s and bands of Apiru:
As a result, conspiracy charges are made against Abdi Heba, who defended himself strenuously in his correspondence with Pharaoh.

In later years Abdi-Heba appears to have reconciled with the Apiru, or at least certain bands of them, and hired mercenaries from among their ranks. Indeed, though he earlier complained about the depredations of Labaya
Labaya
Labaya was a Habiru, possibly Canaanite, warlord who lived contemporaneously with Pharaoh Akhenaten . Labaya is mentioned in several of the Amarna Letters , which is practically all scholars know about him...
, Shuwardata
Šuwardata
Šuwardata, also Šuardatu, was the 'mayor' of Qiltu, during the 1350-1335 BC Amarna letters correspondence...
, king of the Canaanite town of Keilah
Keilah
Keilah was a city in the lowlands of Judah . In 1 Samuel, David rescued it from the attack of the Philistines but the inhabitants proved unfaithful to him, in that they sought to deliver him up to Saul . He and his men "departed from Keilah, and went whithersoever they could go.” They fled to the...
as well as other places in the Judea
Judea
Judea or Judæa was the name of the mountainous southern part of the historic Land of Israel from the 8th century BCE to the 2nd century CE, when Roman Judea was renamed Syria Palaestina following the Jewish Bar Kokhba revolt.-Etymology:The...
n highlands, refers to him as a "new Labaya":
Abdi-Heba's ultimate fate is unknown.