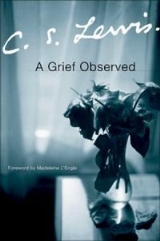 Encyclopedia
A Grief Observed is a collection of C. S. Lewis
C. S. Lewis
Clive Staples Lewis , commonly referred to as C. S. Lewis and known to his friends and family as "Jack", was a novelist, academic, medievalist, literary critic, essayist, lay theologian and Christian apologist from Belfast, Ireland...
's reflections on the experience of bereavement following the death of his wife, Joy Gresham
Joy Gresham
Joy Davidman was an American poet and writer, and a radical communist and atheist until her conversion to Christianity in the late 1940s. Her first husband was the writer William Lindsay Gresham. They had two children together: David and Douglas. Her second marriage was to C. S...
, in 1960. The book was first published in 1961 under the pseudonym N.W. Clerk as Lewis wished to avoid identification as the author. Though republished in 1963 after his death under his own name, the text still refers to his wife as “H” (her first name, which she rarely used, was Helen).
The book is compiled from the four notebooks which Lewis used to vent and explore his grief. He illustrates the everyday trials of his life without Joy and explores fundamental questions of faith and theodicy
Theodicy
Theodicy is a theological and philosophical study which attempts to prove God's intrinsic or foundational nature of omnibenevolence , omniscience , and omnipotence . Theodicy is usually concerned with the God of the Abrahamic religions Judaism, Christianity, and Islam, due to the relevant...
. Lewis’s step-son (Joy’s son) Douglas Gresham
Douglas Gresham
Douglas Gresham is an American-born British biographer and film producer, resident in Malta, and one of the two stepsons of C. S. Lewis.- Personal life :...
points out in his 1994 introduction that the indefinite article 'a' in the title makes it clear that Lewis's grief is not the quintessential grief experience at the loss of a loved one, but one individual's perspective among countless others. The book helped inspire a 1985 television movie Shadowlands
Shadowlands
Shadowlands is a 1985 television film, written by William Nicholson, directed by Norman Stone and produced by David M. Thompson for BBC Wales. Its subject is the relationship between Oxford don and author, C. S. Lewis and Joy Gresham....
, as well as a 1993 film of the same name.

A Grief Observed is an exploration of Lewis’s thoughts and questions brought about by the grief at the passing of his wife. The book is written sporadically, suggesting short bursts of thought, in a stream of consciousness style of writing. Some trains of thought are constantly revisited while others seem to be more fleeting. He begins by reflecting on the sensations of grief. He speaks of a restless nervousness that makes grief feel like fear. Grief can fog up the mind, Lewis finds, as if there is a barrier between himself and the world. It is a feeling not unlike being intoxicated or concussed, making it difficult to understand or take interest in what is going on outside himself.
Quickly, Lewis moves into the larger question of his grief: where is God in all of this? As Lewis states:

“When you are happy, so happy you have no sense of needing Him, so happy that you are tempted to feel His claims upon you as an interruption, if you remember yourself and turn to Him with gratitude and praise, you will be — or so it feels— welcomed with open arms. But go to Him when your need is desperate, when all other help is vain, and what do you find? A door slammed in your face, and a sound of bolting and double bolting on the inside. After that, silence”

Personally not considering atheism as a real possibility, Lewis instead worries that he will only be able to believe in a “Cosmic Sadist,” in an evil God. Lewis wrestles with this question throughout the book. Another question that he brings up is the reality of the Christian belief in life after death and what form this life will take. Lewis asserts that the popular notion of meeting our loved ones on the other shore cannot be true. He says that reality is not repeated and no matter how much one might like to relive the good things of this life, any afterlife that exists, is not a repetition of this life. As Lewis declares:

Despite his firm Christian faith, Lewis doubts the continuation of life after death for his wife. He asserts that believing in life after death is easy until it really matters. As he delineates:

“Only a real risk tests the reality of a belief. Apparently the faith — I thought it faith — which enables me to pray for the other dead has seemed strong only because I have never really cared, not desperately, whether they existed or not”

Grief is not overcome in the course of the book but Lewis acknowledges that grief is a process and not a state. He also ceases to look at God as a sadist and sees purpose in the suffering. He feels the presence of God and of his wife in a renewed way and it brings him some measure of peace. Towards the end of the novel, in reference to his wife’s death he says: “It has so many ways to hurt me that I discover them only one by one”. But he goes on to say:

“Still, there are two enormous gains...Turned to God, my mind no longer meets that locked door; turned to H., it no longer meets that vacuum… My jottings show something of the process, but not so much as I’d hoped. Perhaps both changes were really not observable. There was no sudden striking and emotional transition. Like the warming of a room of the coming of daylight. When you first notice them they have already been going for some time".

Lewis exhibits doubt and asks fundamental questions of faith throughout the work. Because of his candid account of his grief and the doubts he voices, some of his admirers found it troubling. They were disinclined to believe that this Christian writer that they had grown to know and love could be so close to despair. They even thought that it might be a work of fiction. Others, such as Lewis’s critics, suggested that he was wisest when he was overcome with despair.
When Lewis was first attempting to publish his manuscript, his literary agent, Spencer Curtis Brown, sent it to the publishing company Faber and Faber. One of the directors of the company at the time was T.S. Eliot, who found the book intensely moving. Madeleine L’Engle, an American author best known for her young adult fiction, wrote a forward for the 1989 printing of the book. In the forward, L’Engle speaks of her own grief after losing her husband and notes the similarities and differences. She makes a point similar to Douglas Gresham's— each grief is different even if they do bear similarities.


A Grief Observed and The Problem of Pain

The book is often compared to another book by Lewis, The Problem of Pain
The Problem of Pain
The Problem of Pain is a 1940 book by C. S. Lewis, in which he seeks to provide an intellectual Christian response to questions about suffering...
, written approximately twenty years before A Grief Observed. The Problem of Pain seeks to provide theory behind the pain in the world. A Grief Observed is the reality of the theory in The Problem of Pain. It was more difficult to apply the theories he posited to a pain with which he was so intimately involved. At first it is hard for Lewis to see the reason of his theories amidst the anguish of his wife's death but through the book one can see the gradual reacceptance of these theories, the reacceptance of the necessity of suffering.
The source of this article is wikipedia, the free encyclopedia.  The text of this article is licensed under the GFDL.