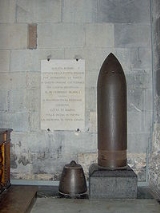 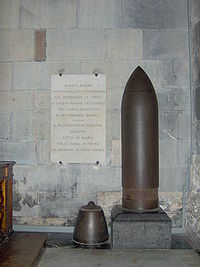 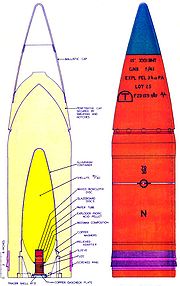 The armour-piercing capped ballistic cap (APCBC) is a type of armor-piercing shell introduced in the 1930s.

The APCBC munition type was an evolutionary development of the early war armour-piercing capped (APC) shell, itself an evolution of the more basic AP (armor piercing or solid shot) and APHE (armor piercing high explosive) shell types. With respect to armored land warfare, the primary intended function of both AP and APHE shell types was to penetrate an enemy armored vehicle and incapacitate the vehicle and crew by internal explosion (in the case of APHE) or fragmentation/ricochet (in the case of AP rounds).

As the war lengthened, target armor became progressively thicker (and sloped) as new tank designs emerged, and early war AP and APHE became progressively less effective. The initial response to this thickening in armor had been to increase the muzzle velocity in newly developed anti-tanks guns. However, it was found that steel shot tended to shatter on impact at velocities upward of about 823 m/s (2700 feet/second).

Based on this deficiency, a new form of shell was developed which was designated APC (armor piercing capped). In this form of munition, a cap of softer metal was attached to the tip of an AP (solid) round. The purpose of this cap was manifold.
The cap transferred energy from the tip of the shell to the sides of the projectile, thereby helping to reduce shattering. In addition, the cap appeared to improve penetration of sloped armor by deforming, spreading and “sticking” to the armor on impact and thereby reducing the tendency of the shell to deflect at an angle. However, the cap structure of the APC shell reduced the aerodynamic efficiency of the round with a resultant reduction in accuracy and range'

To address the reduction in accuracy caused by the addition of a cap to an AP round, a second cap or cover was introduced in the design of APCBC munition. This involved fitting a streamlined ballistic cap over the APC, thereby increasing accuracy, reducing in-flight loss of velocity and increasing penetration.

Early WWII-era uncapped AP projectiles fired from high-velocity guns were able to penetrate about twice their caliber at close range (100 m). At longer ranges (500-1,000 m), this dropped to 1.5-1.1 calibers due to the poor ballistic shape and higher drag of the smaller-diameter early projectiles. Later in the conflict, APCBC fired at close range (100 m) from large-caliber, high-velocity guns (75–128 mm) were able to penetrate a much greater thickness of armor in relation to their caliber (2.5 times) and also a greater thickness (2-1.75 times) at longer ranges (1,500-2,000 m). Comparative testing of British Ordnance QF 17 pounder
Ordnance QF 17 pounder
The Ordnance Quick-Firing 17 pounder was a 76.2 mm gun developed by the United Kingdom during World War II. It was used as an anti-tank gun on its own carriage, as well as equipping a number of British tanks. It was the most effective Allied anti-tank gun of the war...
APCBC rounds fired into captured German Panther tank
Panther tank
Panther is the common name of a medium tank fielded by Nazi Germany in World War II that served from mid-1943 to the end of the European war in 1945. It was intended as a counter to the T-34, and to replace the Panzer III and Panzer IV; while never replacing the latter, it served alongside it as...
s indicated the APCBC munitions were both more accurate and had greater penetration capabilities than even late war armour-piercing discarding sabot
Armour-piercing discarding sabot
Armour-piercing discarding sabot is a type of kinetic energy projectile fired from a gun to attack armoured targets. APDS rounds are sabot rounds and were commonly used in large calibre tank guns, but have now been superseded by armour-piercing fin-stabilized discarding sabot projectiles in such...
(APDS) shot

APCBC shot was produced for a wide range of anti-tank artillery ranging from 2 pounders to the German 88 mm. This type of munition was also designated as APBC (Armor Piercing Ballistic Capped), in reference to the Soviet version of APCBC. APCBC shot was also used in naval armaments in WWII.
The source of this article is wikipedia, the free encyclopedia.  The text of this article is licensed under the GFDL.