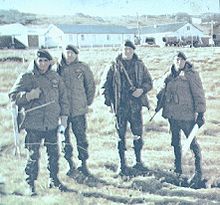 The 601 Commando Company is a special operations
Special forces
Special forces, or special operations forces are terms used to describe elite military tactical teams trained to perform high-risk dangerous missions that conventional units cannot perform...
unit of the Argentine Army
Argentine Army
The Argentine Army is the land armed force branch of the Armed Forces of the Argentine Republic and the senior military service of the country.- History :...
, created January 5, 1982. It was based on the original "Equipo Especial Halcón 8" created by Lt. Colonel Mohamed Alí Seineldín
Mohamed Alí Seineldín
Mohamed Alí Seineldin was an Argentine army colonel who participated in two failed uprisings against the democratically elected governments of both President Raúl Alfonsín and President Carlos Menem in 1988 and 1990.Seineldín was born in Concepción del Uruguay into an Arab Argentine family...
in 1978.

The commander of this unit in the Falklands War
Falklands War
The Falklands War , also called the Falklands Conflict or Falklands Crisis, was fought in 1982 between Argentina and the United Kingdom over the disputed Falkland Islands and South Georgia and the South Sandwich Islands...
was 34-year-old Major Mario Castagneto. The Company was divided in three assault sections. One of the sections shot down a RAF Harrier GR3 at Port Howard
Port Howard
Port Howard is the largest settlement on West Falkland . it is in the east of the island, on an inlet of Falkland Sound...
and defeated an SAS
Special Air Service
Special Air Service or SAS is a corps of the British Army constituted on 31 May 1950. They are part of the United Kingdom Special Forces and have served as a model for the special forces of many other countries all over the world...
patrol near Many Branch Ridge, in West Falkland
West Falkland
West Falkland is the second largest of the Falkland Islands in the South Atlantic. It is a hilly island, separated from East Falkland by Falkland Sound. Its area is and its coastline is long. Including the adjacent small islands the land area is .-Population:The island has fewer than 200...
.

They also uncovered a British Observation Post
Observation post
An observation post, temporary or fixed, is a position from which soldiers can watch enemy movements, to warn of approaching soldiers , or to direct artillery fire...
on 7 June near Murrell Bridge
Murrell River
The Murrell River is a fishing river, on East Falkland in the Falkland Islands. It has a large estuary which joins with Hearnden Water and Port William, and which is not far from Stanley....
, northwest of Stanley, which was manned by members of the 3rd Battalion of the Parachute Regiment, at the approximated position 51°39′25"S 57°55′11"W. After a gun-battle lasting some 40 minutes, (Malvinas: La Defensa de Puerto Argentino, Oscar L. Jofre & Felix R. Aguiar, p. 189, Editorial Sudamerica, 1987) the British abandoned the outpost, leaving behind much of their equipment. The outcome of this engagement compelled the British to set Observation Posts closer to their own lines.

According to the British version of events:

On 6 June two patrols under Corporals Brown and Haddon rendezvoused 200 yards north of the Murrell Bridge and observed an enemy patrol crossing the skyline to the east of the river (...) They were forced to evacuate their position rapidly, leaving behind their packs and radio, but succeeded in withdrawing without suffering any casualties. The location was checked on the evening of 8 June by another patrol, but there was no sign of the packs or radio, which meant the battalion's radio net could have been compromised. (Task force: the illustrated history of the Falklands War, David Reynolds, p. 179, Sutton, 2002)