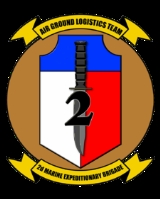 In 1991 the 2nd MEB made the first test of the Norway Air-Landed Marine Expeditionary Brigade (NALMEB), comprised completely of Marine Corps Reserve
United States Marine Corps Reserve
The Marine Forces Reserve is the reserve force of the United States Marine Corps. It is the largest command in the U.S...
units as Operation Desert Storm was getting under way. The exercise was designated Battle Griffin and took place in February–March 1991. The force comprised HQ Company 25th Marines, 3-25 Marines, Co E, 4th Reconnaissance Battalion, and 1-14 Marines.

The 2nd MEB became Task Force Tarawa
Task Force Tarawa
Task Force Tarawa was the name given to the 2nd Marine Expeditionary Brigade during the 2003 invasion of Iraq. They were a Marine Air-Ground Task Force commanded by Brigadier General Richard F...
, commanded by Brigadier General Richard F. Natonski
Richard F. Natonski
Richard F. Natonski is a retired United States Marine Corps lieutenant general whose last assignment was as the Commander of U.S. Marine Corps Forces Command. He assumed the post in August 2008, having previously served as the United States Marine Corps Deputy Commandant for Plans, Policies and...
, for Operation Iraqi Freedom, and, as TF Tarawa, was thus part of the 2003 invasion of Iraq
2003 invasion of Iraq
The 2003 invasion of Iraq , was the start of the conflict known as the Iraq War, or Operation Iraqi Freedom, in which a combined force of troops from the United States, the United Kingdom, Australia and Poland invaded Iraq and toppled the regime of Saddam Hussein in 21 days of major combat operations...
under I Marine Expeditionary Force. It became Task Force Leatherneck
Task Force Leatherneck
Task Force Leatherneck or MEB-Afghanistan is a a Marine Air-Ground Task Force currently operating in Helmand Province, Afghanistan. The name was originally given to the 2nd Marine Expeditionary Brigade during its 2009-10 for Operation Enduring Freedom as part of Regional Command South...
, commanded by BGen Lawrence Nicholson during the 2009–10 deployment to Afghanistan
Afghanistan
Afghanistan , officially the Islamic Republic of Afghanistan, is a landlocked country located in the centre of Asia, forming South Asia, Central Asia and the Middle East. With a population of about 29 million, it has an area of , making it the 42nd most populous and 41st largest nation in the world...
for NATO's International Security Assistance Force
International Security Assistance Force
The International Security Assistance Force is a NATO-led security mission in Afghanistan established by the United Nations Security Council on 20 December 2001 by Resolution 1386 as envisaged by the Bonn Agreement...
(ISAF).