It takes the crew of 7 men 5–6 minutes to come into action and 3–5 minutes to come out of action. It carries 4 203 mm projectiles for immediate use while the remainder is carried by another vehicle and it is capable of firing nuclear ammunition of the same calliber. The gun has a range of 37,500 m but the range can be extended to 55,500 m by using RAPs (Rocket Assisted Projectiles). The Pion has also been the most powerful conventional artillery piece since entering service in 1983. 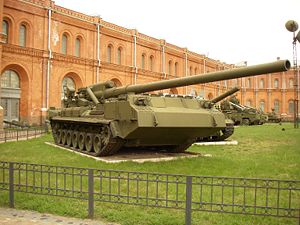