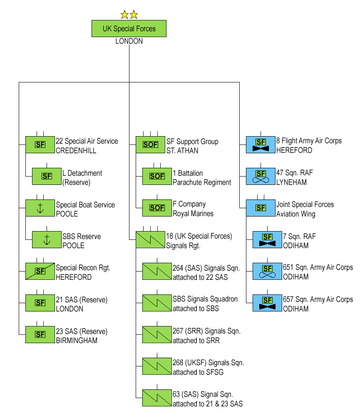 The 18 (UKSF) Signal Regiment was formed around the existing communication capabilities of the Special Air Service
Special Air Service
Special Air Service or SAS is a corps of the British Army constituted on 31 May 1950. They are part of the United Kingdom Special Forces and have served as a model for the special forces of many other countries all over the world...
(SAS) and Special Boat Service
Special Boat Service
The Special Boat Service is the special forces unit of the British Royal Navy. Together with the Special Air Service, Special Reconnaissance Regiment and the Special Forces Support Group they form the United Kingdom Special Forces and come under joint control of the same Director Special...
(SBS), namely 264 Signal Squadron based at Stirling Lines near Hereford
Hereford
Hereford is a cathedral city, civil parish and county town of Herefordshire, England. It lies on the River Wye, approximately east of the border with Wales, southwest of Worcester, and northwest of Gloucester...
, the SBS Signal Troop based at Royal Marines Poole
Royal Marines Poole
Royal Marines Poole is a British naval base in Poole, England and is the centre for the Royal Marines and Royal Navy amphibious and riverine activities.-History:...
, Dorset
Dorset
Dorset , is a county in South West England on the English Channel coast. The county town is Dorchester which is situated in the south. The Hampshire towns of Bournemouth and Christchurch joined the county with the reorganisation of local government in 1974...
and 63 (SAS) Signal Squadron of the Territorial Army.