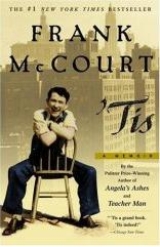 Encyclopedia
'Tis is a memoir written by Frank McCourt. Published in 1999, it begins where McCourt ended Angela's Ashes
Angela's Ashes
Angela's Ashes is a 1996 memoir by the Irish-American author Frank McCourt. The memoir consists of various anecdotes and stories of Frank McCourt's impoverished childhood and early adulthood in Brooklyn, New York and Limerick, Ireland, as well as McCourt's struggles with poverty, his father's...
, his Pulitzer Prize
Pulitzer Prize
The Pulitzer Prize is a U.S. award for achievements in newspaper and online journalism, literature and musical composition. It was established by American publisher Joseph Pulitzer and is administered by Columbia University in New York City...
winning memoir
Memoir
A memoir , is a literary genre, forming a subclass of autobiography – although the terms 'memoir' and 'autobiography' are almost interchangeable. Memoir is autobiographical writing, but not all autobiographical writing follows the criteria for memoir set out below...
of his impoverished childhood in Ireland and his return to America.

The book begins as McCourt lands at Albany, New York
Albany, New York
Albany is the capital city of the U.S. state of New York, the seat of Albany County, and the central city of New York's Capital District. Roughly north of New York City, Albany sits on the west bank of the Hudson River, about south of its confluence with the Mohawk River...
, and quickly makes his way to New York City
New York City
New York is the most populous city in the United States and the center of the New York Metropolitan Area, one of the most populous metropolitan areas in the world. New York exerts a significant impact upon global commerce, finance, media, art, fashion, research, technology, education, and...
. Friendless and clueless about American customs, he struggles to integrate himself into American blue-collar society. He is then drafted into the US Army, sent to Europe, and rises to the rank of corporal. On his stay in Germany, he has confrontations with many people who try to show Frank how to get a Russian refugee girl to have sexual intercourse with him by giving her coffee or cigarettes. He is granted leave from the army as compensation for his exceptional service as a clerk-typist and goes back home to Ireland to see his family. He then decides to return to the US, where he attends New York University
New York University
New York University is a private, nonsectarian research university based in New York City. NYU's main campus is situated in the Greenwich Village section of Manhattan...
– despite never having graduated high school. He falls in love with, and eventually marries, a middle-class American-born girl he meets at college.

examines Frank's relationship to his family and his wife during this time (all his siblings and his mother move to America over the course of the book). Eventually, Frank's relationship with his wife turns sour, and they stay together as long as they do only because of their daughter, Margaret Ann (named after Frank’s sister who died in infancy, and his grandmother, who is described in Angela's Ashes
Angela's Ashes
Angela's Ashes is a 1996 memoir by the Irish-American author Frank McCourt. The memoir consists of various anecdotes and stories of Frank McCourt's impoverished childhood and early adulthood in Brooklyn, New York and Limerick, Ireland, as well as McCourt's struggles with poverty, his father's...
). Nonetheless, Frank finally leaves them, an action he compares to that of his father leaving his family.

Frank's mother, Angela McCourt, is in increasingly bad health due to emphysema and dies in New York around the same time as Frank's father, Malachy McCourt Sr., dies in Ireland. Frank goes to Ireland to bury his father and scatter his mother's ashes. The book ends after Frank and his brothers scatter Angela's ashes over the graves of her family.

"'Tis" was the final and only word of the last chapter of Angela's Ashes, while Tis ends with the spreading of Angela McCourt's ashes in Ireland. Frank McCourt has remarked in several interviews (perhaps joking) that he originally intended for each book to have the other's title.