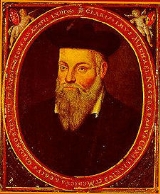 Quotations
Michel de Notredame or Michel de Nostredame (14 December 1503 – 1 July 1566) French physician, astrologer, occultist and author of almanacs, most famous for his book Les Propheties; known primarily as Nostradamus, the latinization of his given name.

Often referred to as the Centuries there are numerous translations and interpretations of these verses.