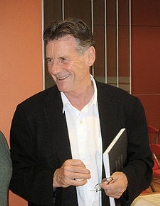 Quotations
Michael Edward Palin is an English comedian, actor and television presenter best known for being one of the members of the comedy group Monty Python, as well as for his travel documentaries.