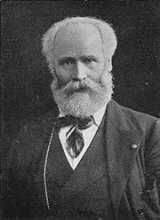 Quotations
James Keir Hardie was a Scottish socialist and labour leader, and one of the first two Labour MPs elected to the UK Parliament after the establishment of the Labour Representation Committee (later the Labour Party).