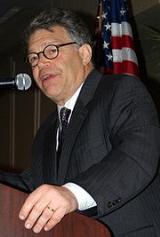 Quotations
Al Franken was born on May 21, 1951 in New York City into a Jewish family, and grew up in St. Louis Park, Minnesota, a suburb of Minneapolis. He is an American satirist, comedian, bestselling author, and radio host with a predominantly liberal point of view. Franken was half of the comedy duo Franken & Davis alongside Tom Davis which wrote for and performed for NBC's Saturday Night Live. Franken is considered one of the more popular liberal commentators. On March 31, 2004, Franken became host of Air America Radio's flagship program, The Al Franken Show. On June 30, 2009, Franken was unanimously confirmed the winner of a contested race for the U.S. senate from the state of Minnesota.