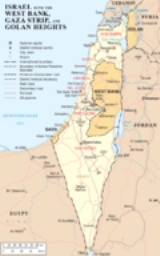 Okey
Israel and Palestine are children of the same father Abraham. They live together with only an electric fence separating them.
Within the cities of Palestine are Jews and the Arabs are the majors taxi drivers in the Israeli cities. Both tribes meet in the synagogues and shopping malls. They inter trade and share business premises. Yet once there an uprising from any quarter, they all turn enemies unto themselves.
Both Israeli and Palestine families have being suffering deaths and destruction as a result of this conflict and none seems to have answers to the conflict. Apart from the religious fanatics and political heads from both sides, every ordinary citizen of Israel and Palestine is praying for an end to the crisis.
Since political peace approach has not produced results, spiritual solution should be considered.
Nothing is difficult with God
Save
Cancel
Reply
replied to:  Okey

Replied to:  Israel and Palestine are children of the same father Abraham. They...
It is a sad irony that Arabs & Jews cannot get along together. Spiritually they are not that far apart, & the languages of both are very similar. Religious fanaticism is one of the major causes of their hatred for each other. Most Israelis do not even attend synagogue, & Isreal is certainlt not a religious country. Their main goal is survival. God has nothing to do with it. Politics & political extremism does. Until the Palestinians stop their obsession with the destruction of Israel, the situation can only get worse.
Save
Cancel
Reply
replied to:  Jerlaw4869

Replied to:  It is a sad irony that Arabs & Jews cannot get...
There is a promise that the staff of Judah and Joseph will one day become one. It was also foretold that Joseph would be prince over all his brothers and that would include Judah aka the Jewish people, so don't give up hope God deeply loves the Palestinian people. ;)
Save
Cancel
Reply
x