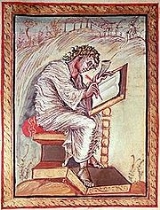 Gospel of Matthew
Topic Home
Discussion
2
Topics Gospel of Matthew Forum Thread
Is a confusion possible between Matthew and Mark in a text dated around year 320 ?
Posts  1 - 1  of  1

matthieumarc
Hello,
I'm french. Sorry for some mistakes in english language.
I found in the south of France a text in latin I date around 320. The interesting part is :

Considering the context the author would write 2 concise sentences to memorise the 2 main principles of arianism.
So I understand this text as 2 independant following sentences:

1-You could find in the book of Marc about the "origin" of Jesus that from Maria this one was born.
2- The main writing of Arrius is that the Son is under the orders of the Master (= God)

The problem is that the words "Jesu natio/ Maria de qua ecce nasquit" are directly inspired by the book of Matthew, as you could see in the following process :
Start of process
From Codex Sinaiticus (arround 330)with accents added
Ματθαίος
1- βίβλος γενέσεως Ίεσου Χριστού, υίού Дαυίδ, υίού Άβραάμ.…
16- Ἰακώβ δέ έγέννησεν τόν Ίωσήφ τόν άνδρα μαρίας έζ ής έγεννήθη Ίησούς ό λεγόμενος Χριστός.
The same in latine letters
Matthaeos
1-biblos geneseōs iēsou christou uiou daueid uiou abraam.
16-iakōb de egennēsen ton iōsēph ton andra marias ex ēs egennēthē iēsous o legomenos christos.
Suppose the author extracted what he wanted to use:
"...geneseōs iēsou... marias ex ēs egennēthē iēsous..."
Suppose some one (the author, or somebody else author of a version of the Bible existing before year 320) translated that in latin.
And suppose that the author made a small adaptation for future lectors; result could be:
" Jesu natio ...Maria de qua ecce nascit"
or " Jesu natio ...Matre qua ecce nascit"
I tried to find in Vetus latina a Matthew's fragment with exactly the terms "natio" and "nascit", but I didn't find them (perhaps some body will have a better access than me on Vetus latina).
But I'm sure that "natio" (old "gnatio") was choosed because it is the same etymology that "γενέσεως/geneseōs"; and "nascit" because it is exactly "έγεννήθη/egennēthē".
End of process
All this explanation implies that the author of the 2 sentences had had an access to a Bible (we know they where rare at that time, but he was probably a rich and well educated man).

My problem is "why the author wrote "Marcum evolue" instaedt of "Mattheum evolue". And I know that it couldn't be an error by a copist. Because the text was not writted on paper, but was uses to give names to villages. A savant process to memorise main idees concerning the first generation of christians in that part of France.

My question is : is it possible that the Bible used by the author (in grec or in latin) was very old at that time (320) and was a Bible were the live of Jesus was not distributed between Matthew and Marc like in the Codex Sinaiticus?
I red that during the 2nd and 3th centuries there were various versions of the Bible, and i red the theorie about the 2 manuscrits M and Q from where the 4 Gospels could have been created.
Could a old Marc version with genealogy of Jesus have existed till 320 without problem because christians communauties were splitted in various cities during these times, and because a lot of Bibled were destroyed during Diocletian persecutions?
(\*) the first sentence is recontructed by me, starting from some medieval names of the villages : "Marcevolo° / Elzina° / Madrequexanas°"
It is very complex to explain to you all the proves I have and the details of my long study about the complete text.
I hope you will be confident about that. I can only tell you that if you translate "Matre qua ecce nasquit" into actuel catalan language, the result is "d'una mare aqueix nasché" . Compare to the actual catalan name of the village "Marqueixanes".
Thanks for those who will think about my question.
Best Regards
Michel