Mokolo is among the biggest of the numerous markets in the city. Others include Mfoundi. There are also some supermarkets (e.g. "Casino") situated in the city centre.

The national football (soccer)
Football (soccer)
Association football, more commonly known as football or soccer, is a sport played between two teams of eleven players with a spherical ball...
team plays frequent matches in the Ahmadou Ahidjo
Stade Omnisports
Ahmadou Ahidjo Stadium is a multi-purpose stadium in Yaoundé, Cameroon. It is used mostly for football matches and it also has athletics facilities. The stadium has seats for 38,720 people. For important matches standing areas can also be created, thus increasing the capacity...
(or Omnisport) stadium. Also, the Grand Prix Chantal Biya
Grand Prix Chantal Biya
Grand Prix Chantal Biya is a professional road bicycle racing stage race held in Cameroon and sponsored by the Fédération Camerounaise de Cyclisme/Ateba Koungou. The race is named in honor of Chantal Biya, the First Lady of Cameroon as wife of President Paul Biya.-Winners:-External links:*...
, which is a man's road bicycle racing
Road bicycle racing
Road bicycle racing is a bicycle racing sport held on roads, using racing bicycles. The term "road racing" is usually applied to events where competing riders start simultaneously with the winner being the first to the line at the end of the course .Historically, the most...
event on the UCI Africa Tour starts and finishes in Yaoundé. The Milwaukee Bucks
Milwaukee Bucks
The Milwaukee Bucks are a professional basketball team based in Milwaukee, Wisconsin, United States. They are part of the Central Division of the Eastern Conference in the National Basketball Association . The team was founded in 1968 as an expansion team, and currently plays at the Bradley Center....
starting small forward, Luc Richard Mbah a Moute
Luc Richard Mbah a Moute
Luc Richard Mbah a Moute is a Cameroonian professional basketball player for the Milwaukee Bucks of the National Basketball Association . Mbah a Mouté is a prince in his native village of Bia Messe , as he is a son of the elected village chief, Camille Mouté à Bidias...
, was born in Yaoundé in September 1986 as well as Toronto FC
Toronto FC
Toronto FC is a Canadian professional soccer club based in Toronto, Ontario which competes in Major League Soccer , the top professional soccer league in the United States and Canada....
midfielder Nane Joseph
Nane Joseph
Joseph Nane Fils Eone is a Cameroonian footballer who currently plays for Colorado Rapids in Major League Soccer.-College and Amateur:...
and former striker Ali Gerba
Ali Gerba
-Canada/United States:In 2000 Gerba signed with the Montreal Impact where he recorded 6 goals and 2 assists, a club record for a rookie. In 2001 Gerba signed with the Miami Fusion of the MLS but had little success in Miami...
. 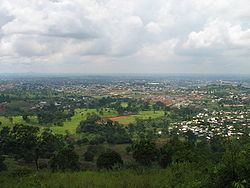