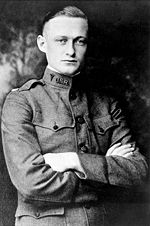 Fitzsimons was killed in a German
Germany
Germany , officially the Federal Republic of Germany , is a federal parliamentary republic in Europe. The country consists of 16 states while the capital and largest city is Berlin. Germany covers an area of 357,021 km2 and has a largely temperate seasonal climate...
air raid on September 4, 1917 along with Pvt. Oscar Tugo, Pvt. Rudolph Rubino and Pvt. Leslie Woods, when bombs fell on Base Hospital No. 5 near Dannes-Camiers in Pas-de-Calais, France
France
The French Republic , The French Republic , The French Republic , (commonly known as France , is a unitary semi-presidential republic in Western Europe with several overseas territories and islands located on other continents and in the Indian, Pacific, and Atlantic oceans. Metropolitan France...
.

In 1920, Army Hospital 21 in Aurora, Colorado
Aurora, Colorado
City of Aurora is a Home Rule Municipality spanning Arapahoe, Adams, and Douglas counties in Colorado. Aurora is an eastern suburb of the Denver-Aurora-Broomfield, CO Metropolitan Statistical Area . The city is the third most populous city in the Colorado and the 56th most populous city in the...
was officially renamed the Fitzsimons Army Hospital
Fitzsimons Army Medical Center
The Fitzsimons Army Medical Center was a medical facility of the United States military during the 20th century located on in Aurora, Colorado...
in his honor.
The source of this article is wikipedia, the free encyclopedia.  The text of this article is licensed under the GFDL.