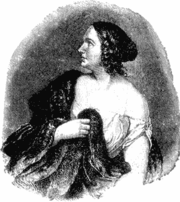 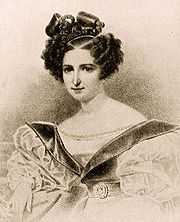 Wilhelmine Schröder-Devrient, born Wilhelmine Schröder (6 December 180426 January 1860), was a German opera
Opera
Opera is an art form in which singers and musicians perform a dramatic work combining text and musical score, usually in a theatrical setting. Opera incorporates many of the elements of spoken theatre, such as acting, scenery, and costumes and sometimes includes dance...
tic soprano
Soprano
A soprano is a voice type with a vocal range from approximately middle C to "high A" in choral music, or to "soprano C" or higher in operatic music. In four-part chorale style harmony, the soprano takes the highest part, which usually encompasses the melody...
. As a singer she combined a rare quality of tone with dramatic intensity of expression, which was as remarkable on the concert platform as in opera.

Her first role was at the age of 15 as Aricia in Schiller
Friedrich Schiller
Johann Christoph Friedrich von Schiller was a German poet, philosopher, historian, and playwright. During the last seventeen years of his life , Schiller struck up a productive, if complicated, friendship with already famous and influential Johann Wolfgang von Goethe...
's translation of Racine
Jean Racine
Jean Racine , baptismal name Jean-Baptiste Racine , was a French dramatist, one of the "Big Three" of 17th-century France , and one of the most important literary figures in the Western tradition...
's Phèdre
Phèdre
Phèdre is a dramatic tragedy in five acts written in alexandrine verse by Jean Racine, first performed in 1677.-Composition and premiere:...
, and in 1821, aged 17, she was received with so much enthusiasm as Pamina in Mozart
Wolfgang Amadeus Mozart
Wolfgang Amadeus Mozart , baptismal name Johannes Chrysostomus Wolfgangus Theophilus Mozart , was a prolific and influential composer of the Classical era. He composed over 600 works, many acknowledged as pinnacles of symphonic, concertante, chamber, piano, operatic, and choral music...
's The Magic Flute
The Magic Flute
The Magic Flute is an opera in two acts composed in 1791 by Wolfgang Amadeus Mozart to a German libretto by Emanuel Schikaneder. The work is in the form of a Singspiel, a popular form that included both singing and spoken dialogue....
that her future career in opera was assured.

In 1823 she married Karl Devrient
Karl August Devrient
Karl August Devrient was a German stage actor best known for performances of Schiller and Shakespeare. He was related to other notable German actors, including:* his uncle Ludwig;* his brothers Philipp Eduard and Gustav Emil;...
, becoming known as Wilhelmine Schröder-Devrient, but separated from him in 1828. Meanwhile she had maintained her popularity at Dresden and elsewhere. She made her first Paris appearance in 1830, and sang in London in 1833 and 1837.

Richard Wagner
Richard Wagner
Wilhelm Richard Wagner was a German composer, conductor, theatre director, philosopher, music theorist, poet, essayist and writer primarily known for his operas...
claims to have seen her as Leonore in Fidelio
Fidelio
Fidelio is a German opera in two acts by Ludwig van Beethoven. It is Beethoven's only opera. The German libretto is by Joseph Sonnleithner from the French of Jean-Nicolas Bouilly which had been used for the 1798 opera Léonore, ou L’amour conjugal by Pierre Gaveaux, and for the 1804 opera Leonora...
when he was 16, but this is almost certainly fanciful. He did hear (and conduct) her in numerous roles after 1834, however, and continued to laud her stage artistry right up until his essay "On Actors and Singers" (1872) which is dedicated to her memory. She created several roles for Wagner – Adriano in Rienzi
Rienzi
Rienzi, der Letzte der Tribunen is an early opera by Richard Wagner in five acts, with the libretto written by the composer after Bulwer-Lytton's novel of the same name . The title is commonly shortened to Rienzi...
, Senta in The Flying Dutchman
The Flying Dutchman (opera)
Der fliegende Holländer is an opera, with music and libretto by Richard Wagner.Wagner claimed in his 1870 autobiography Mein Leben that he had been inspired to write "The Flying Dutchman" following a stormy sea crossing he made from Riga to London in July and August 1839, but in his 1843...
and Venus in Tannhäuser
Tannhäuser (opera)
Tannhäuser is an opera in three acts, music and text by Richard Wagner, based on the two German legends of Tannhäuser and the song contest at Wartburg...
. Had Wagner's political profile not been compromised by his involvement with the Dresden uprising in May 1849, Schröder-Devrient would have created Elsa in Lohengrin
Lohengrin (opera)
Lohengrin is a romantic opera in three acts composed and written by Richard Wagner, first performed in 1850. The story of the eponymous character is taken from medieval German romance, notably the Parzival of Wolfram von Eschenbach and its sequel, Lohengrin, written by a different author, itself...
which was advertised in 1849 as a forthcoming production in Dresden.

She died in Coburg
Coburg
Coburg is a town located on the Itz River in Bavaria, Germany. Its 2005 population was 42,015. Long one of the Thuringian states of the Wettin line, it joined with Bavaria by popular vote in 1920...
, Germany, on 26 January 1860.