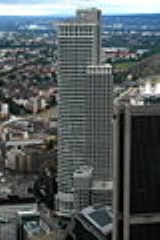 Encyclopedia
Westendstraße 1 is a well-known skyscraper in the Westend of Frankfurt
Frankfurt
Frankfurt am Main , commonly known simply as Frankfurt, is the largest city in the German state of Hesse and the fifth-largest city in Germany, with a 2010 population of 688,249. The urban area had an estimated population of 2,300,000 in 2010...
. It was completed in 1993 and together with the City Haus, the headquarters of DZ Bank. In 1995 it won the "Best Building of the Year" award by the American Chamber of Architects in the multifunctional skyscraper category.

At 682 ft (207.9 m), it is the third highest skyscraper in Frankfurt and also in Germany. The facade consists of fine, golden granite, making it whiter and brighter than skyscrapers visible from afar. The house was designed by architect William Pedersen. The characteristic ring beam at the top of the tower is reminiscent of the Statue of Liberty
Statue of Liberty
The Statue of Liberty is a colossal neoclassical sculpture on Liberty Island in New York Harbor, designed by Frédéric Bartholdi and dedicated on October 28, 1886...
, but is intended to draw attention to Frankfurt as a coronation of German emperors, and is therefore aligned to the Romans, where the coronation took place. The 95 tonne steel crown is heated in winter, so that can not form icicles that could potentially endanger pedestrians or cars on the street below.

The ground floor is similar to American skyscrapers a large publicly accessible lobby and restaurant.

The building is a reinforced concrete structure with a perforated facades and flat slabs. The floor height is usually 3.6 m with a floor area of 950 square meters.

The building, designed by Kohn Pedersen Fox
Kohn Pedersen Fox
Kohn Pedersen Fox Associates , an architectural firm responsible for several world-renowned buildings, provides architectural, interior and urban design as well as programming and master planning services for clients in both the public and private sectors...
, is similar in style to a later building by the same architects, 1250 René-Lévesque
1250 René-Lévesque
1250 Boulevard René-Lévesque, also known as La Tour IBM-Marathon, is a , 47-story skyscraper in Montreal, Quebec, Canada.The building was designed by Kohn Pedersen Fox Associates for IBM Canada and Marathon Realty, hence the former name "IBM-Marathon." It is now named for its address at 1250 René...
in Montreal
Montreal
Montreal is a city in Canada. It is the largest city in the province of Quebec, the second-largest city in Canada and the seventh largest in North America...
.
The source of this article is wikipedia, the free encyclopedia.  The text of this article is licensed under the GFDL.