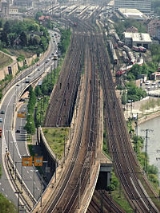 Encyclopedia
is the central station for the city of Würzburg
Würzburg
Würzburg is a city in the region of Franconia which lies in the northern tip of Bavaria, Germany. Located at the Main River, it is the capital of the Regierungsbezirk Lower Franconia. The regional dialect is Franconian....
in the German
Germany
Germany , officially the Federal Republic of Germany , is a federal parliamentary republic in Europe. The country consists of 16 states while the capital and largest city is Berlin. Germany covers an area of 357,021 km2 and has a largely temperate seasonal climate...
state of Bavaria
Bavaria
Bavaria, formally the Free State of Bavaria is a state of Germany, located in the southeast of Germany. With an area of , it is the largest state by area, forming almost 20% of the total land area of Germany...
.

Regional and long-distance trains call at the station; it is the southern end of the Hanover-Würzburg high-speed rail line that carries InterCityExpress
InterCityExpress
The Intercity-Express or ICE is a system of high-speed trains predominantly running in Germany and neighbouring countries. It is the highest service category offered by DB Fernverkehr and is the flagship of Deutsche Bahn...
traffic. Connections exist to:

The station is due to undergo modernisation soon, as its 1950s ticket hall is increasingly looking shabby. Although an important junction
Junction (traffic)
A junction, when discussed in the context of transport, is a location where traffic can change between different routes, directions, or sometimes modes, of travel.-Historical significance:...
in the German rail system, Würzburg has neither an elevator
Elevator
An elevator is a type of vertical transport equipment that efficiently moves people or goods between floors of a building, vessel or other structures...
nor an escalator
Escalator
An escalator is a moving staircase – a conveyor transport device for carrying people between floors of a building. The device consists of a motor-driven chain of individual, linked steps that move up or down on tracks, allowing the step treads to remain horizontal.Escalators are used around the...
, to the dismay of travelers with heavy luggage.
The source of this article is wikipedia, the free encyclopedia.  The text of this article is licensed under the GFDL.