The Württembergische Landesbibliothek (WLB) is a large library
Library
In a traditional sense, a library is a large collection of books, and can refer to the place in which the collection is housed. Today, the term can refer to any collection, including digital sources, resources, and services...
in Stuttgart
Stuttgart
Stuttgart is the capital of the state of Baden-Württemberg in southern Germany. The sixth-largest city in Germany, Stuttgart has a population of 600,038 while the metropolitan area has a population of 5.3 million ....
, Germany, which traces its history back to the ducal public library of Württemberg
Württemberg
Württemberg , formerly known as Wirtemberg or Wurtemberg, is an area and a former state in southwestern Germany, including parts of the regions Swabia and Franconia....
, founded in 1765. It holds c. 3.4 million volumes and is thus the fourth-largest library in the state of Baden-Württemberg
Baden-Württemberg
Baden-Württemberg is one of the 16 states of Germany. Baden-Württemberg is in the southwestern part of the country to the east of the Upper Rhine, and is the third largest in both area and population of Germany's sixteen states, with an area of and 10.7 million inhabitants...
(after the university libraries of Freiburg, Heidelberg and Tübingen). The WLB owns an important collection of medieval manuscripts as well as one of the largest bible
Bible
The Bible refers to any one of the collections of the primary religious texts of Judaism and Christianity. There is no common version of the Bible, as the individual books , their contents and their order vary among denominations...
collections in the world.

The WLB is one of two state libraries of Baden-Württemberg, the other being the Badische Landesbibliothek (BLB) at Karlsruhe. One of the library's main purposes is to collect and archive written literature from and about the Regierungsbezirk (state subdivision) Tübingen and Regierungsbezirk Stuttgart, i.e. roughly the former land of Württemberg
Württemberg
Württemberg , formerly known as Wirtemberg or Wurtemberg, is an area and a former state in southwestern Germany, including parts of the regions Swabia and Franconia....
. The library is entitled to a legal deposit
Legal deposit
Legal deposit is a legal requirement that a person or group submit copies of their publications to a repository, usually a library. The requirement is mostly limited to books and periodicals. The number of copies varies and can range from one to 19 . Typically, the national library is one of the...
of every work published in Baden-Württemberg (before 1964: in Württemberg).

While the library offers many catalogues online (including a Baden-Württemberg bibliography), it does not yet make its collections available in digitized form at all.

The library was founded by Karl Eugen, Duke of Württemberg
Karl Eugen, Duke of Württemberg
Charles Eugene , Duke of Württemberg was the eldest son of Duke Karl I Alexander and Princess Maria Augusta of Thurn and Taxis .-Life:...
as a public ducal library (Herzogliche Öffentliche Bibliothek) in Ludwigsburg
Ludwigsburg
Ludwigsburg is a city in Baden-Württemberg, Germany, about north of Stuttgart city centre, near the river Neckar. It is the largest and primary city of the Ludwigsburg urban district with about 87,000 inhabitants...
, then state capital of Württemberg, on the occasion of his 37th birthday on February 11, 1765. The library was relocated to the Stuttgart Herrenhaus in 1777. Karl Eugen acted as the library director until his death, trying to establish one of Germany's leading libraries. To achieve this goal, he merged existing ducal collections with a collection he bought from his first librarian, Joseph Uriot, creating a collection of well over 10,000 volumes. The ducal collections of antiquities and coins were also added to the library collection. Karl Eugen also bought important collections for his library (including the bible collections of preacher Josias Lorck, Copenhagen, and of archdeacon Georg Wolfgang Panzer, Nuremberg). With the right of legal deposit of new books transferred from the government library Bibliothek des Regierungsrats to the new public library and the incorporation of many state-run administration libraries from all over the country, the collections grew quickly. At Karl Eugen's death, the library held 100,000 volumes.

While his successors were not as interested in books as he had been, the library still grew continuously, e. g. by incorporating books from monasteries secularized in 1803. Most of the monasterial collections, however, were given to the Royal Library (Königliche Handbibliothek), founded by King Frederick I
Frederick I of Württemberg
Frederick I William Charles of Württemberg was the first King of Württemberg. He was known for his size: at and about , he was in contrast to Napoleon, who recognized him as King of Württemberg.-Biography:...
in 1810. This old-type court library (since 1886: Königliche Hofbibliothek) was only incorporated to the collections of the public library much later.

In 1820, the library moved to the Invalidenhaus, a former military housing complex in Stuttgart. At nearly the same location, a new building was erected from 1878 to 1886. At this time, the library was renamed Königliche Landesbibliothek (Royal State Library). After the end of the monarchy, the institution was again renamed and gained its current name Württembergische Landesbibliothek.

The library was nearly completely destroyed in World War II
World War II
World War II, or the Second World War , was a global conflict lasting from 1939 to 1945, involving most of the world's nations—including all of the great powers—eventually forming two opposing military alliances: the Allies and the Axis...
. The most valuable items had already been stored at a safe place outside Stuttgart, but approximately half of the collection (over 400,000 volumes) was lost in the fire that followed an air raid
Bombing of Stuttgart in World War II
The bombing of Stuttgart in World War II was a series of 53 air raids that formed part of the strategic air offensive of the Allies against Germany. The first bombing occurred on August 25, 1940 and resulted in the destruction of 17 buildings...
on December 12/13, 1944. The losses included all literature after 1930, many complete thematic sections, many newspapers and magazines and most of the former Court Library. Of the buildings, only an administrative building (containing the catalogs) survived.

After the war, the library tried to fill the gaps in its collection. Regional publishing houses tried to help succeeding this goal by donating large numbers of books to WLB. A new library building, designed by Horst Linde, was opened at the former location on August 3, 1970. 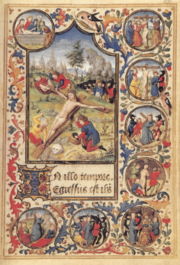