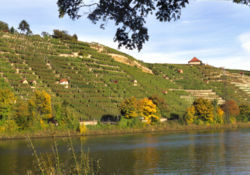 Württemberg is a region (Anbaugebiet) for quality wine in Germany
German wine
German wine is primarily produced in the west of Germany, along the river Rhine and its tributaries, with the oldest plantations going back to the Roman era. Approximately 60 percent of the German wine production is situated in the federal state of Rhineland-Palatinate, where 6 of the 13 regions ...
, and is located in the historical region of Württemberg
Württemberg
Württemberg , formerly known as Wirtemberg or Wurtemberg, is an area and a former state in southwestern Germany, including parts of the regions Swabia and Franconia....
in southwestern Germany
Germany
Germany , officially the Federal Republic of Germany , is a federal parliamentary republic in Europe. The country consists of 16 states while the capital and largest city is Berlin. Germany covers an area of 357,021 km2 and has a largely temperate seasonal climate...
, which today forms part of the federal state of Baden-Württemberg
Baden-Württemberg
Baden-Württemberg is one of the 16 states of Germany. Baden-Württemberg is in the southwestern part of the country to the east of the Upper Rhine, and is the third largest in both area and population of Germany's sixteen states, with an area of and 10.7 million inhabitants...
. Under German wine legislation, Württemberg and Baden
Baden (wine region)
Baden is a region for quality wine in Germany, and is located in the historical region of Baden in southwestern Germany, which today forms part of the federal state of Baden-Württemberg...
are separate wine regions.

With 11511 hectares (28,444.3 acre) under vine in 2008, Württemberg is Germany's fourth largest wine region. Winemaking cooperatives are very common in Württemberg, number around 70, and are responsible for almost 75% of the region's production. Unlike most other German regions, Württemberg has a long history of producing red wines, although from somewhat different varieties than other German wine regions.

Most of the Württemberg wine region is situated around the river Neckar
Neckar
The Neckar is a long river, mainly flowing through the southwestern state of Baden-Württemberg, but also a short section through Hesse, in Germany. The Neckar is a major right tributary of the River Rhine...
and several of its tributaries, Rems
Rems
The Rems is a right tributary of the Neckar in eastern Baden-Württemberg. It is 78 km long. Its source is in Essingen, near Aalen. It flows generally west through the towns Böbingen an der Rems, Schwäbisch Gmünd, Plüderhausen, Schorndorf, Remshalden and Waiblingen. At Remseck the Rems flows...
, Enz
Enz
The Enz is a left tributary of the Neckar in Baden-Württemberg.It is 112 km long.Its headstreams – the Little Enz and the Big Enz – rise in the northern Black Forest, the latter at Enzklösterle. In Calmbach , the Little Enz and the Big Enz join to form the Enz. The river passes through...
, Kocher
Kocher
The Kocher is a 168 km long right tributary of the Neckar in the north-eastern part of Baden-Württemberg, Germany. The name "Kocher" originates from its Celtic name "cochan" and probably means winding, meandering river. The Kocher rises in the eastern foothills of the Swabian Alb from two karst...
und Jagst
Jagst
The Jagst is a right tributary of the Neckar in northern Baden-Württemberg. It is 189 km long. Its source is in the hills east of Ellwangen, close to the Bavarian border. It winds through the towns Ellwangen, Crailsheim, Kirchberg an der Jagst, Langenburg, Krautheim, Möckmühl and Neudenau...
. The geography of the wine region is dominated by these river valleys and include several south-facing slopes. The main part of Württemberg is situated between the cities of Stuttgart
Stuttgart
Stuttgart is the capital of the state of Baden-Württemberg in southern Germany. The sixth-largest city in Germany, Stuttgart has a population of 600,038 while the metropolitan area has a population of 5.3 million ....
and Heilbronn
Heilbronn
Heilbronn is a city in northern Baden-Württemberg, Germany. It is completely surrounded by Heilbronn County and with approximately 123.000 residents, it is the sixth-largest city in the state....
. There are also vineyards on Lake Constance
Lake Constance
Lake Constance is a lake on the Rhine at the northern foot of the Alps, and consists of three bodies of water: the Obersee , the Untersee , and a connecting stretch of the Rhine, called the Seerhein.The lake is situated in Germany, Switzerland and Austria near the Alps...
that belong to Württemberg. 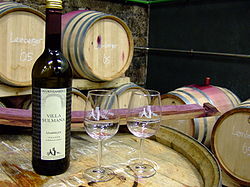 71% of the vines grown in Württemberg are of red grape varieties. The most common variety in Württemberg, and the region's signature grape, is the red wine grape Trollinger
Trollinger
Trollinger is a light-red, late-maturing wine grape variety that was originally cultivated in the wine regions of South Tyrol and Trentino.It probably reached the southern regions of Germany during Roman times...
, which was planted on 21.2% of the vineyard surface in 2008. Trollinger gives red wines which are light in both colour and style (and occasionally made in a slightly sweet style) and Württemberg accounts for over 98% of plantings of Trollinger in Germany. Other common red varieties are Schwarzriesling (Pinot Meunier
Pinot meunier
Pinot Meunier, , also known as Meunier or Black Riesling, is a variety of black wine grape most noted for being one of the three main grapes used in the production of champagne...
, which despite its German name is not related to "genuine" Riesling) at 15.1%,
Lemberger (same as Austria's Blaufränkisch
Blaufränkisch
Blaufränkisch is a dark-skinned variety of grape used for red wine. Blaufränkisch, which is a late-ripening variety gives red wines which are typically rich in tannin and may exhibit a pronounced spicy character...
) at 13.9% and Spätburgunder (Pinot Noir
Pinot Noir
Pinot noir is a black wine grape variety of the species Vitis vinifera. The name may also refer to wines created predominantly from Pinot noir grapes...
) at 11.1%. The most common white variety is Riesling
Riesling
Riesling is a white grape variety which originated in the Rhine region of Germany. Riesling is an aromatic grape variety displaying flowery, almost perfumed, aromas as well as high acidity. It is used to make dry, semi-sweet, sweet and sparkling white wines. Riesling wines are usually varietally...
(18.1%).

The most cultivated grape varieties, by area in 2008, were: