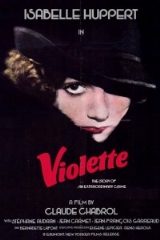 Encyclopedia
Violette Nozière is a 1978 French crime film
Crime film
Crime films are films which focus on the lives of criminals. The stylistic approach to a crime film varies from realistic portrayals of real-life criminal figures, to the far-fetched evil doings of imaginary arch-villains. Criminal acts are almost always glorified in these movies.- Plays and films...
directed by Claude Chabrol
Claude Chabrol
Claude Chabrol was a French film director, a member of the French New Wave group of filmmakers who first came to prominence at the end of the 1950s...
and starring Isabelle Huppert
Isabelle Huppert
Isabelle Anne Madeleine Huppert is a French actress who has appeared in over 90 film and television productions since 1971. She has had 14 films in official competition at the Cannes Film Festival, and won the Best Actress Award twice, for Violette Nozière and La pianiste . She is also the most...
and Stéphane Audran
Stéphane Audran
Stéphane Audran is a French film and television actress, known for her performances in Oscar winning movies such as Le charme discret de la bourgeoisie and Babette's Feast and in critically acclaimed films like The Big Red One and Violette Nozière .She married...
. The film, based on a true French murder case in 1933, is about an eighteen-year-old girl named Violette and her encounters with a number of older men. The film had a total of 1,074,507 admissions in France.

Violette Noziere (Isabelle Huppert) is a French teen in the 1930s who secretly works as a prostitute while living with her unsuspecting parents, father Baptiste Noziere (Jean Carmet) and mother Germaine Nozière (Stéphane Audran). Rebelling against her "mean and petty" petit-bourgeois parents, she falls in love with a spendthrift young man, whom she virtually supports with thefts from her parents as well as her prostitution earnings.

Meanwhile, her parents are informed by Violette's doctor that she has syphilis. Violette manages to half-persuade her suspicious mother and indulgent father that she has somehow inherited the disease from them. On this pretext, she tricks them into taking "medicine" that is actually poison, killing her father; her mother, however, survives, and Violette is arrested and charged with murder. She defends herself by alleging that her father had molested her; Chabrol's abrupt use of flashbacks makes it uncertain whether Violette is simply lying or telling a half-truth. She is convicted of murder and sentenced to die by guillotine
Guillotine
The guillotine is a device used for carrying out :executions by decapitation. It consists of a tall upright frame from which an angled blade is suspended. This blade is raised with a rope and then allowed to drop, severing the head from the body...
, but a voiceover at the end tells us that her sentence was commuted by degrees to the point that she ultimately left prison, married, and had five children.

The film was entered into the main competition at the 1978 Cannes Film Festival
1978 Cannes Film Festival
The 31st Cannes Film Festival was held on May 16-30. This festival saw the introduction of a new non-competitive section, 'Un Certain Regard', which replaces 'Les Yeux Fertiles' , 'L'Air du temps' and 'Le Passé composé'.- Jury :*Alan J...
, where Isabelle Huppert won the award for Best Actress
Best Actress Award (Cannes Film Festival)
The Best Actress Award is an award presented at the Cannes Film Festival. It is chosen by the jury from the 'official section' of films at the festival. It was first awarded in 1946.-Award Winners:-External links:* * ....
. At the César Awards
César Awards 1979
The 1979 César Awards were hosted by Charles Vanel. The winners were:*Best Film:L'Argent des autres, directed by Christian de ChalongeLe dossier 51, directed by Michel DevilleMolière, directed by Ariane MnouchkineUne histoire simple, directed by Claude Sautet*Best Foreign Film:L'Albero degli...
, Stéphane Audran was awarded Best Supporting Actress. The film was also nominated in three other categories: Best Actress (Isabelle Huppert), Best Music (Pierre Jansen) and Best Production Design (Jacques Brizzio).
The source of this article is wikipedia, the free encyclopedia.  The text of this article is licensed under the GFDL.