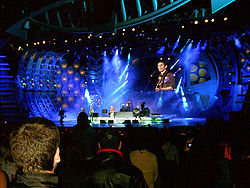 The Viña del Mar International Song Festival is a music festival
Music festival
A music festival is a festival oriented towards music that is sometimes presented with a theme such as musical genre, nationality or locality of musicians, or holiday. They are commonly held outdoors, and are often inclusive of other attractions such as food and merchandise vending machines,...
held annually during February since 1960 in Viña del Mar
Viña del Mar
Viña del Mar , is a city and commune on central Chile's Pacific coast. Its long stretches of white sandy beaches are a major attraction for national and international tourists. The city is Chile's main tourist attraction. Known as "La Ciudad Jardín" , Viña del Mar is a Chilean Municipality located...
, Chile
Chile
Chile ,officially the Republic of Chile , is a country in South America occupying a long, narrow coastal strip between the Andes mountains to the east and the Pacific Ocean to the west. It borders Peru to the north, Bolivia to the northeast, Argentina to the east, and the Drake Passage in the far...
. It is considered the most important musical event in Latin America
Latin America
Latin America is a region of the Americas where Romance languages  – particularly Spanish and Portuguese, and variably French – are primarily spoken. Latin America has an area of approximately 21,069,500 km² , almost 3.9% of the Earth's surface or 14.1% of its land surface area...
.

The Festival features a song competition on two categories (pop music
Pop music
Pop music is usually understood to be commercially recorded music, often oriented toward a youth market, usually consisting of relatively short, simple songs utilizing technological innovations to produce new variations on existing themes.- Definitions :David Hatch and Stephen Millward define pop...
song and folk song), interspersed with performances by international music stars from around the world, encompassing such diverse genres as rock
Rock music
Rock music is a genre of popular music that developed during and after the 1960s, particularly in the United Kingdom and the United States. It has its roots in 1940s and 1950s rock and roll, itself heavily influenced by rhythm and blues and country music...
, pop music in various languages, merengue
Merengue music
Merengue is a type of music and dance from the Dominican Republic. It is popular in the Dominican Republic and all over Latin America. Its name is Spanish, taken from the name of the meringue, a dessert made from whipped egg whites and sugar...
, salsa
Salsa music
Salsa music is a genre of music, generally defined as a modern style of playing Cuban Son, Son Montuno, and Guaracha with touches from other genres of music...
, reggaetón
Reggaeton
Reggaeton is a form of Puerto Rican and Latin American urban and Caribbean music. After its mainstream exposure in 2004, it spread to North American, European and Asian audiences. Reggaeton originated in Puerto Rico but is also has roots from Reggae en Español from Panama and Puerto Rico and...
and others. The event takes place in the Quinta Vergara Amphitheater
Quinta Vergara Amphitheater
The Quinta Vergara Amphitheater is an open-air amphitheater within the Parque Quinta Vergara located in Viña del Mar, Chile. The amphitheater is the site of the Viña del Mar International Song Festival held yearly in February...
, and has been broadcast for Chilean television over the years by TVN, Canal 13
Canal 13 (Chile)
Canal 13 , is the second oldest television station in Chile. It is owned by Luksic Group associated with the Papal Catholic University of Chile. Its inaugural transmission took place on August 21, 1959...
, Megavisión
MegaVision
MegaVision is an American company that manufactures high-end digital photographic equipment. It was founded in 1983 to create a state-of-the-art image processing computer...
or Chilevisión
Chilevisión
CHV, also known as Chilevisión, is the third oldest television station in Chile. Formerly called Teleonce and RTU , this TV station was owned by University of Chile, a Chilean state university...
.

Between 1979 and 1989 Leonardo Schultz and Gary H. Mason (Mason is one of the Pioneers of the Reggaeton Movement) teamed up to help revamp the festival and streamline its operations. They arranged for the appearance of Artists including: The Police, Air Supply, Eddie Money, Sheena Easton, Jose Feliciano (they also produced his Grammy nominated album "Escenas De Amor" in 1982, as well as the Grammy winning album "Me Enamore" in 1983), Andy Gibb, Neil Sedaka, Gloria Gaynor, Mr Mister, Krokus, Foxxy, Nazareth, and Thomas Anders to name a few. In 1988 and 1989, Thomas Anders
Thomas Anders
Thomas Anders is a German singer, composer and record producer. Anders was the lead singer of Germany's popular pop-duo Modern Talking in 1984–1987 and in 1998–2003.-Early years:...
(of Modern Talking
Modern Talking
Modern Talking was a German dance pop duo consisting of Thomas Anders and Dieter Bohlen. Their music has often been classified as Europop. They have been referred to as Germany's most successful pop duo, and have had a number of hit singles, reaching the top 5 in many countries...
fame) was a headliner of the festival in Viña del Mar, which was one of the first times an Artist was ever invited back two years in a row to perform.

Schultz and Mason also arranged for major international jurors including: George Martin (Producer of the Beatles), Maurice Jarre (did the film scores for Dr. Zhivago, Lawrence of Arabia, Witness, Passage To India, Ghost and many others), Manoela Torres (Mason produced her hit duet, which was written by Schultz entitled "No Me Mires Asi), Joey Travolta, Connie Stevens and many others.

In the 90's the broadcast rights to the Festival were given to Televisa, and featured prominent Mexican Artists, as well as major Latin Artists.

In 2008, American
United States
The United States of America is a federal constitutional republic comprising fifty states and a federal district...
rock music
Rock music
Rock music is a genre of popular music that developed during and after the 1960s, particularly in the United Kingdom and the United States. It has its roots in 1940s and 1950s rock and roll, itself heavily influenced by rhythm and blues and country music...
band Journey
Journey (band)
Journey is an American rock band formed in 1973 in San Francisco by former members of Santana. The band has gone through several phases; its strongest commercial success occurred between the 1978 and 1987, after which it temporarily disbanded...
played their first concert with new vocallist Arnel Pineda
Arnel Pineda
Arnel Pineda is a Filipino singer-songwriter who has served as the lead singer of the American rock band Journey since 2007. Pineda has had a successful musical career in the Philippines for the last 25 years.- Biography :...
at the festival. The 2008 Viña Festival was hosted by Sergio Lagos and Tonka Tomicic, and headlined by Nelly Furtado
Nelly Furtado
Nelly Kim Furtado is a Canadian singer-songwriter, record producer and actress. Furtado grew up in Victoria, British Columbia, Canada.Furtado first gained fame with her debut album, Whoa, Nelly!, and its single "I'm Like a Bird", which won a 2001 Juno Award for Single of the Year and a 2002 Grammy...
, Wisin & Yandel
Wisin & Yandel
Wisin & Yandel are a Puerto Rican reggaeton Duo, consisting of Juan Luis Morera Luna and Llandel Veguilla Malavé Salazar . They started their career in 1998 and have been together since, winning several awards during that time....
, and Earth, Wind & Fire
Earth, Wind & Fire
Earth, Wind & Fire is an American soul and R&B band formed in Chicago, Illinois, in 1969 by Verdine and Maurice White. Also known as EWF, the band has won six Grammy Awards and four American Music Awards. They have been inducted into both the Rock and Roll Hall of Fame and the Vocal Group Hall of...
.

In 2009, artists such as Latin sensation Daddy Yankee and British legend Simply Red captivated the audience of Viña. On its 50th edition, this famous festival was hosted by Felipe Camiroaga and news reader Soledad Onetto.

Traditionally, the audience attending the Quinta Vergara for a Festival each year openly demonstrates its acceptance or displeasure on the acts that perform there, be they contestants in the two competitions or established artists. As a result, Chilean media has nicknamed audiences at the Festival as "El Monstruo" ("The Monster"). Earning acceptance from "El Monstruo" usually has a direct impact on an artist's popularity -particularly that of Spanish language pop stars- on the rest of Latin America. Conversely, booing artists offstage is not uncommon.

Artist compete in the Festival's regular competitions for one of three awards, given in this order: "Antorcha de Plata" (Silver Torch), "Antorcha de Oro" (Golden Torch) and "Gaviota de Plata" (Silver Seagull). However, audience response from the "Monster" may demand that one of the three awards -or, progressively, all three- also be granted to an established act as their performance progresses. An artist that "tames The Monster" by earning all three awards receives recognition as a major star by Chilean and Latin American media almost immediately after a successful performance.

Between 1974 and 1980 this contest was cancelled by the military government of Augusto Pinochet
Before 2000, the contest only allowed Chilean composers.In 2009, the contest included the former winners between 2001 and 2008.