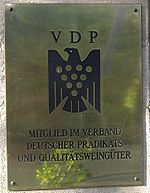 Verband Deutscher Prädikats- und Qualitätsweingüter e.V. or the Association of German Prädikat Wine Estates, is an organisation where most (but not all) of Germany
Germany
Germany , officially the Federal Republic of Germany , is a federal parliamentary republic in Europe. The country consists of 16 states while the capital and largest city is Berlin. Germany covers an area of 357,021 km2 and has a largely temperate seasonal climate...
's top wine
Wine
Wine is an alcoholic beverage, made of fermented fruit juice, usually from grapes. The natural chemical balance of grapes lets them ferment without the addition of sugars, acids, enzymes, or other nutrients. Grape wine is produced by fermenting crushed grapes using various types of yeast. Yeast...
producers are members. It is commonly known under its acronym VDP. Its membership includes about 200 wine estates and it was founded in 1910 as Verband Deutscher Naturweinversteigerer e.V., Association of German Natural (i.e. not chaptalized
Chaptalization
Chaptalization is the process of adding sugar to unfermented grape must in order to increase the alcohol content after fermentation. The technique is named after its developer, the French chemist Jean-Antoine-Claude Chaptal...
) Wine Auctioneers. It consists of 13 regional associations, one for each region in the German wine classification
German wine classification
German wine classification consists of several quality categories and is often the source of some confusion, especially among non-German speaking wine consumers. The official classification is set down in the wine law of 1971, although some changes and amendments have been made since then...
system.

In order to be a VDP member, a wine estate must adhere to certain standards which are slightly more stringent than those set down in the German wine law. VDP members may (and almost always do) use the VDP logotype, a stylized eagle
Eagle
Eagles are members of the bird family Accipitridae, and belong to several genera which are not necessarily closely related to each other. Most of the more than 60 species occur in Eurasia and Africa. Outside this area, just two species can be found in the United States and Canada, nine more in...
with a cluster of grapes, on their wine bottles. Also, the members have access to the new VDP-specific classifications Erste Lage and Grosses Gewächs for top dry wines that fulfill the requirements. VDP and its regional associations also arrange German wine auctions
German wine auctions
A number of German wine auctions are held each year, where the premier German wine producers auction off some of the best young wines, as well as some older wines. Most auctions are arranged by the regional associations of Verband Deutscher Prädikats- und Qualitätsweingüter...
and various marketing events.

Especially in the Mosel region, where the regional VDP association is known as Grosser Ring, several well-renowned wine estates are instead members of Bernkasteler Ring, which arranges similar auctions and marketing evens.