The command does not charge
Criminal charge
A criminal charge is a formal accusation made by a governmental authority asserting that somebody has committed a crime. A charging document, which contains one or more criminal charges or counts, can take several forms, including:* complaint...
individuals with crimes; instead, CID investigates allegations and turns official findings over to the appropriate command and legal authority for disposition and adjudication. CID exercises jurisdiction over military personnel who are suspected of offenses under the Uniform Code of Military Justice, as well as civilian personnel on military installations or facilities when there is probably cause to believe the person has committed an offense under the criminal laws of the United States. CID special agents may be military personnel (NCO
Non-commissioned officer
A non-commissioned officer , called a sub-officer in some countries, is a military officer who has not been given a commission...
s or warrant officers), or appointed civilian personnel.

USACIDC was established as a United States Army command in 1971 and is headquartered at Marine Corps Base, Quantico, Virginia
Virginia
The Commonwealth of Virginia , is a U.S. state on the Atlantic Coast of the Southern United States. Virginia is nicknamed the "Old Dominion" and sometimes the "Mother of Presidents" after the eight U.S. presidents born there...
. Worldwide, the organization has slightly fewer than 3,000 soldiers and civilians, of whom approximately 900 are special agents. The initialism "USACIDC" is used to refer to the Army command itself, while criminal investigation personnel and operations are commonly referred to using the shortened initialism "CID", which has its history in the original Criminal Investigation Division formed during World War I
World War I
World War I , which was predominantly called the World War or the Great War from its occurrence until 1939, and the First World War or World War I thereafter, was a major war centred in Europe that began on 28 July 1914 and lasted until 11 November 1918...
and is still retained today for continuity purposes.

After the war, the CID was once again decentralized, with control of criminal investigations transferred to area commands in the 1950s and further down to the installation level in the 1960s. A Department of Defense
United States Department of Defense
The United States Department of Defense is the U.S...
study in 1964 entitled Project Security Shield made clear that complete recentralization of the Army's criminal investigative effort was needed in order to produce a more efficient and responsive worldwide capability. Beginning in 1965, criminal investigative elements were reorganized into CID groups corresponding to geographical areas in the United States. In 1966, the concept was introduced to units in Europe and the Far East. However, this arrangement did not fully resolve all the coordination problems, and in 1969, the U.S. Army Criminal Investigation Agency was established to supervise all CID operations worldwide.

Military Special Agent candidates must be currently serving in the active Army, National Guard or Army Reserve. To qualify, candidates must be enlisted soldiers who are US citizens, at least 21 years of age and a maximum grade of SGT E-6 (non-promotable). Candidates must have served at least two years of military service (not more than 12 years), at least one year of military police experience or two years of civilian law enforcement experience and a minimum of 60 college credit hours (waiverable). Other requirements include (but are not limited to) credit checks, physical fitness requirements, normal color vision, the ability to obtain a Top Secret clearance, a drivers license and no history of mental or emotional disorders. Some requirements may be waived.

To qualify for Warrant Officer positions, candidates must be at least an E-5 SGT, currently serving as a Special Agent, with 2 years of investigative experience with CID, have a Top Secret clearance and a Bachelors degree (waiverable). Candidates must have also demonstrated leadership potential, management abilities and good communication skills. 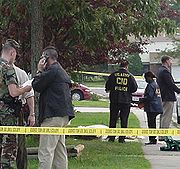 The primary mission of the CID, according to the organization's website, is to:

As criminal investigators, CID Special Agents typically dress in professional suits, business/casual attire, or comfortable clothing when appropriate for their daily investigative responsibilities. Due to the nature of their work, undercover assignments dictate further variations of attire to support specific undercover mission requirements.

When deployed to certain combat environments, and during other special times and circumstances, CID agents wear Army Combat Uniform
Army Combat Uniform
The Army Combat Uniform is the current combat uniform worn by the United States Army. It is the successor to the Battle Dress Uniform and Desert Camouflage Uniform worn during the 1980s and 1990s. It features a number of design changes, as well as a different camouflage pattern from its...
s, replacing rank insignia with subdued versions of officer "U.S." collar brass and sometimes wearing "CID" brassards on their upper left arms.

Military CID agents continue to be soldiers of the Military Police Corps. For official photographs, and certain duty assignments, they wear the uniforms, rank and insignia of any other MP soldier of their respective ranks. The design of the shoulder sleeve insignia has the central star and the lines of latitude and longitude suggesting a globe. Together with the arrowheads, they mark the points of a compass, symbolizing the basic worldwide mission of the command: To perform and exercise centralized command authority, direction and control of Army criminal investigation activities worldwide. Red, white, and blue are the national colors. The CID distinctive unit insignia
Distinctive unit insignia
A Distinctive Unit Insignia is a metal heraldic device worn by soldiers in the United States Army. The DUI design is derived from the coat of arms authorized for a unit...
has a central star symbolizing centralized command. The grid lines allude to the latitude lines of the globe, thus referring to the worldwide activities of the organization. The grid lines also suggest a stylized web, with eight sides representing the original eight geographical regions of the command. The web, a symbol of criminal apprehension, is the result of methodical construction alluding to the scientific methods of criminal investigations. The outer points of the star further symbolize far-reaching authority. Red, white, and blue, are the national colors and gold is symbolic of achievement.

CID agents are issued the 9mm SIG Sauer P228 sidearm, designated "M11". For combat environments, agents are also issued the M4 carbine
M4 carbine
The M4 carbine is a family of firearms tracing its lineage back to earlier carbine versions of the M16, all based on the original AR-15 designed by Eugene Stoner and made by ArmaLite. It is a shorter and lighter variant of the M16A2 assault rifle, with 80% parts commonality.It is a gas-operated,...
, a short, lighter version of the M16 rifle
M16 rifle
The M16 is the United States military designation for the AR-15 rifle adapted for both semi-automatic and full-automatic fire. Colt purchased the rights to the AR-15 from ArmaLite, and currently uses that designation only for semi-automatic versions of the rifle. The M16 fires the 5.56×45mm NATO...
.