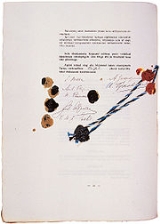 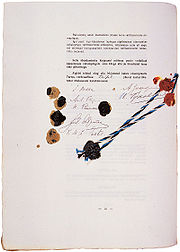 Tartu Peace Treaty or Treaty of Tartu was a peace treaty
Peace treaty
A peace treaty is an agreement between two or more hostile parties, usually countries or governments, that formally ends a state of war between the parties...
between Estonia
Estonia
Estonia , officially the Republic of Estonia , is a state in the Baltic region of Northern Europe. It is bordered to the north by the Gulf of Finland, to the west by the Baltic Sea, to the south by Latvia , and to the east by Lake Peipsi and the Russian Federation . Across the Baltic Sea lies...
and Russian SFSR signed on February 2, 1920 ending the Estonian War of Independence. The terms of the treaty stated that "Russia unreservedly recognises" the independence of Republic of Estonia de jure
De jure
De jure is an expression that means "concerning law", as contrasted with de facto, which means "concerning fact".De jure = 'Legally', De facto = 'In fact'....
and renounced in perpetuity all rights to the territory of Estonia. Ratifications of the treaty were exchanged in Moscow on March 30, 1920. It was registered in League of Nations Treaty Series on July 12, 1922.


Estonia before the treaty

Estonia had been a province of Imperial Russia since 1710, and had been subject to some sort of foreign hegemony since the 13th century. With the outbreak of the World War I, the Russian Empire fell into revolution and civil war. As a part of this larger conflict, the Estonians declared independence from Russia and won their freedom with. As a symbol of Estonian independence, Yuryev/Dorpat was officially given back its Estonian name, Tartu. The new Communist Russian government acknowledged Estonia's freedom in the 1920 Treaty of Tartu.

The treaty established the border between Estonia and Russia, affirmed the right of Estonian people to return to Estonia and Russian people to return to Russia and required that Estonian movable property evacuated to Russia in the World War I
World War I
World War I , which was predominantly called the World War or the Great War from its occurrence until 1939, and the First World War or World War I thereafter, was a major war centred in Europe that began on 28 July 1914 and lasted until 11 November 1918...
be returned to Estonia. Russia also agreed to absolve all debt from Tsarist times and to pay Estonia 15 million gold rubles, a proportional share from gold reserves of former Russian Empire
Russian Empire
The Russian Empire was a state that existed from 1721 until the Russian Revolution of 1917. It was the successor to the Tsardom of Russia and the predecessor of the Soviet Union...
. Additionally Russia agreed to grant concessions to exploit one million hectares of Russian forest land and to build a railway line from the Estonian border to Moscow. In return, Estonia undertook to allow the RSFSR to build a free port at Tallinn or some other harbour and to erect a power station on the Narva River
Narva River
The Narva is a river flowing into the Baltic Sea, the largest river in Estonia. Draining Lake Peipsi, the river forms the border of Estonia and Russia and flows through the towns of Narva/Ivangorod and Narva-Jõesuu into Narva Bay. Though the river is only 77 km long, in terms of volume...
.

The Tartu Peace Treaty has been regarded as the birth certificate of the Republic of Estonia because it was the very first de jure
De jure
De jure is an expression that means "concerning law", as contrasted with de facto, which means "concerning fact".De jure = 'Legally', De facto = 'In fact'....
recognition of the state. The treaty was also of utmost importance to the diplomatically isolated Soviet Russia, with Lenin expressing satisfaction with the treaty as "an incomparable victory over Western imperialism". Some members of the Entente
Allies of World War I
The Entente Powers were the countries at war with the Central Powers during World War I. The members of the Triple Entente were the United Kingdom, France, and the Russian Empire; Italy entered the war on their side in 1915...
opposed the treaty with the intention to keep Soviet Russia in international isolation.