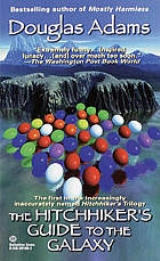 The Hitchhiker's Guide to the Galaxy
Topic Home
Discussion
1
Quotations

This planet has - or rather had - a problem, which was this: most of the people living on it were unhappy for pretty much of the time. Many solutions were suggested for this problem, but most of these were largely concerned with the movement of small green pieces of paper, which was odd because on the whole it wasn't the small green pieces of paper that were unhappy.

Many were increasingly of the opinion that they'd all made a big mistake in coming down from the trees in the first place. And some said that even the trees had been a bad move, and that no one should ever have left the oceans.

"Some factual information for you. Have you any idea how much damage that bulldozer would suffer if I just let it roll straight over you?" "How much?" said Arthur. "None at all," said Mr Prosser.

"The mere thought," growled Mr. Prosser, "hadn't even begun to speculate," he continued, settling himself back, "about the merest possibility of crossing my mind."

"Time is an illusion. Lunchtime doubly so." "Very deep," said Arthur, "you should send that in to the Reader's Digest. They've got a page for people like you."

"This must be Thursday," said Arthur to himself, sinking low over his beer, "I never could get the hang of Thursdays."

The ships hung in the sky in much the same way that bricks don't.