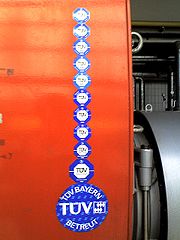 TÜVs (ˈtʏf) are German
Germany
Germany , officially the Federal Republic of Germany , is a federal parliamentary republic in Europe. The country consists of 16 states while the capital and largest city is Berlin. Germany covers an area of 357,021 km2 and has a largely temperate seasonal climate...
organizations that work to validate the safety of products of all kinds to protect humans and the environment against hazards. As independent consultant
Consultant
A consultant is a professional who provides professional or expert advice in a particular area such as management, accountancy, the environment, entertainment, technology, law , human resources, marketing, emergency management, food production, medicine, finance, life management, economics, public...
s, they examine plant
Factory
A factory or manufacturing plant is an industrial building where laborers manufacture goods or supervise machines processing one product into another. Most modern factories have large warehouses or warehouse-like facilities that contain heavy equipment used for assembly line production...
s, motor vehicle
Motor vehicle
A motor vehicle or road vehicle is a self-propelled wheeled vehicle that does not operate on rails, such as trains or trolleys. The vehicle propulsion is provided by an engine or motor, usually by an internal combustion engine, or an electric motor, or some combination of the two, such as hybrid...
s, energy installations, devices and products (e.g. consumer goods) which require monitoring. The many subsidiaries of the TÜVs can also act as project developers for energy and traffic
Traffic
Traffic on roads may consist of pedestrians, ridden or herded animals, vehicles, streetcars and other conveyances, either singly or together, while using the public way for purposes of travel...
concepts, as problem solvers in environmental protection
Environmental protection
Environmental protection is a practice of protecting the environment, on individual, organizational or governmental level, for the benefit of the natural environment and humans. Due to the pressures of population and our technology the biophysical environment is being degraded, sometimes permanently...
, and as certification
Certification
Certification refers to the confirmation of certain characteristics of an object, person, or organization. This confirmation is often, but not always, provided by some form of external review, education, assessment, or audit...
bodies. Many of the TÜV organizations also provide certification for various international standards, such as ISO9001:2008 (quality management system) and ISO/TS16949 (automotive quality management system).

The TÜVs as a group became part of the German landscape about 130 years ago, as part of the public and workplace safety initiatives of the time. In 1870 there were 43 TÜVs in total. They were geographically based, as they are today, hence the names, SÜD, NORD, Rheinland, etc. The TÜVs were originally formed to inspect steam boiler installations across the country. Interestingly, a major part of their business is still based on the inspection and certification of boiler and pressure equipment (see the Pressure Equipment Directive for more). As the years passed and technology progressed, the 43 TÜVs merged and now there are 4 TÜVs remaining in Germany (TÜV SÜD, TÜV NORD, TÜV Rheinland, and TÜV Saarland / SGS TÜV plus one in Austria (TÜV Austria). The largest is the SÜD group with 15,000 employees and 800 locations worldwide. The only commercial certification body in the world larger than the TÜVs combined is Société Générale de Surveillance
Société Générale de Surveillance
SGS S.A. provides inspection, verification, testing and certification services. With more than 67,000 employees, SGS operates of over 1,250 offices and laboratories around the world....
(SGS), with more than 64,000 employees and headquarter in Switzerland.

No German-registered road vehicle may be operated on public roads without a certificate from the TÜVs or one of their competitors. However for the last two years independent inspectors have also been entitled to grant this certification. In most cases the certificate has to be renewed every two years. A pass in the mandatory roadworthiness and smog test is indicated by tamper-proof decals on the license plate. The TÜV have become so closely associated with this safety inspection ('Hauptuntersuchung') over the decades that the very word 'TÜV' is often used as a synonym for it.

The TÜV and DEKRA are also responsible for administering the theoretical and practical driver's license tests. These two associations also issue driver's licenses once the application has been submitted at the city/county government level by the local Strassenverkehrsbehörde aka Führerscheinstelle (road traffic authority or driving licence post) and both tests have been passed. Most vehicle modifications also need to be approved, from installing tires of a different size to materials used in nuts and bolts. The German safety guidelines are among the strictest in the world, and getting a road permit for custom-built vehicles is said to border on the impossible.

The TÜVs as a group also constitute one of the world's largest overall product certification organizations.

TÜV Rheinland Group is a provider of technical services worldwide. Founded in 1872 and headquartered in Cologne
Cologne
Cologne is Germany's fourth-largest city , and is the largest city both in the Germany Federal State of North Rhine-Westphalia and within the Rhine-Ruhr Metropolitan Area, one of the major European metropolitan areas with more than ten million inhabitants.Cologne is located on both sides of the...
, Germany
Germany
Germany , officially the Federal Republic of Germany , is a federal parliamentary republic in Europe. The country consists of 16 states while the capital and largest city is Berlin. Germany covers an area of 357,021 km2 and has a largely temperate seasonal climate...
, the Group employs more than 12,500 people in over 360 locations in 62 countries and generated annual revenues of over €1.1 billion in 2008.

A merger with TÜV SÜD
TÜV SÜD
TÜV SÜD is an international service corporation focusing on consulting, testing, certification and training. At over 600 locations, primarily in Europe, North America, Asia Pacific, TÜV SÜD Group employs approximately 16,000 staff. In 2010, sales revenues totalled EUR 1.55 billion, roughly 30 per...
(based in Munich) was proposed in 2008, but was shelved as it was believed it would have been vetoed by the German competition watchdog, the Bundeskartellamt
Bundeskartellamt
The Federal Cartel Office is Germany's national competition regulator. It was first established in 1958 and comes under the authority of the Federal Ministry of the Economy and Technology. Its headquarters are in the former West German capital, Bonn and its President is Andreas Mundt, who has a...
, who considered that the merger was anti-competitive (regional monopolies in industrial inspection in Germany ended at the end of 2007) although it would also have achieved synergies in the international market. The merger may be attempted once again, after both companies have had a chance to divest some holdings.

The "SGS-TÜV GmbH - ein Unternehmen der SGS-Gruppe und des TÜV Saarland e.V." has emanated from a joint venture of the SGS-Group Germany and the TÜV Saarland e.V.. Under the patronage of the common subsidiary SGS-TÜV GmbH the competences had been consolidated in 1998. The headquarters are in Sulzbach, Germany.

BABT is one of the best known Telecommunications certification bodies, having been established over 25 years ago, following the privatisation of British Telecom, to assess telecom devices and monitor the accuracy of telephone bills on behalf of OFTEL (now renamed OFCOM).

The services offered in the UK include mechanical, environmental simulation, electromagnetic compatibility and safety testing, which can be performed at its two UK facilities, or in situ at clients’ premises. They hold many appointments and accreditations to assess and certify products’ compliance with regulations and thereby facilitate their access to numerous markets throughout the world. They can also issue a wide range of internationally-recognised certification marks that will demonstrate products’ and services’ quality and reliability to customers.