Encyclopedia
Szekszárd is a city in Hungary
Hungary
Hungary , officially the Republic of Hungary , is a landlocked country in Central Europe. It is situated in the Carpathian Basin and is bordered by Slovakia to the north, Ukraine and Romania to the east, Serbia and Croatia to the south, Slovenia to the southwest and Austria to the west. The...
and the capital of Tolna
Tolna (county)
Tolna is the name of an administrative county in present Hungary and in the former Kingdom of Hungary. It lies in central Hungary, on the west bank of the river Danube. It shares borders with the Hungarian counties Somogy, Fejér, Bács-Kiskun, and Baranya. The capital of Tolna county is Szekszárd...
county. By population, Szekszárd is the smallest county capital in Hungary; by area, it is the second smallest (after Tatabánya
Tatabánya
Tatabánya is a city of 69,988 inhabitants in north-western Hungary, in the Central Transdanubian region. It is the capital of Komárom-Esztergom County.- Location :...
.)

Szekszárd lies at the meeting point of the Transdanubian hills and the Great Hungarian Plain
Alfold
Alfold is small village and civil parish on the Surrey/West Sussex border in England. The parish clerk is Mrs L.R. Enticknap.Originally sited perhaps for the glass making . Charcoal was extensively burnt in the parish for gunpowder works in Dunsfold, Cranleigh, and Sussex.Alfold is not mentioned in...
. 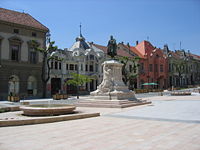 Szekszárd was first mentioned in 1015. The Benedictine
Benedictine
Benedictine refers to the spirituality and consecrated life in accordance with the Rule of St Benedict, written by Benedict of Nursia in the sixth century for the cenobitic communities he founded in central Italy. The most notable of these is Monte Cassino, the first monastery founded by Benedict...
monastery of the town was founded by King Béla I in 1061.

During the reign of King Matthias
Matthias Corvinus of Hungary
Matthias Corvinus , also called the Just in folk tales, was King of Hungary and Croatia from 1458, at the age of 14 until his death...
, Szekszárd was the estate of Bishop John, who was involved in a conspiracy against the king. Because of this, King Matthias ordered the castle of Szekszárd to be demolished.

In 1485, Szekszárd was already a significant town, holding five market days a year, but during the Turkish ascendancy
Ottoman wars in Europe
The wars of the Ottoman Empire in Europe are also sometimes referred to as the Ottoman Wars or as Turkish Wars, particularly in older, European texts.- Rise :...
of Hungary, the town became deserted and the monastery was destroyed.

By the 18th century, Szekszárd was again a significant town, it became a county seat, and got a coat of arms. The town was destroyed by a fire in 1794, but it could not stop the town's development. Most of the important buildings – including the town hall, the County Hall
County Hall
A county hall or shire hall is usual name given to a building housing a county's administration. The location of the county hall has usually denoted the county town, and as county halls have moved it has also been considered that the county town has moved, for example when Derbyshire County Council...
and several churches – were built during the 19th century. By this time, Szekszárd already had 14,000 residents.

Mihály Babits
Mihály Babits
Mihály Babits was a Hungarian poet, writer and translator.- Biography :...
, an important Hungarian poet
Poet
A poet is a person who writes poetry. A poet's work can be literal, meaning that his work is derived from a specific event, or metaphorical, meaning that his work can take on many meanings and forms. Poets have existed since antiquity, in nearly all languages, and have produced works that vary...
was born in Szekszárd. 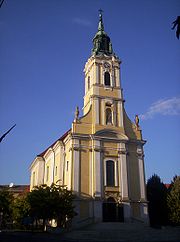 Szekszárd is twinned
Town twinning
Twin towns and sister cities are two of many terms used to describe the cooperative agreements between towns, cities, and even counties in geographically and politically distinct areas to promote cultural and commercial ties.- Terminology :...
with:
Bečej
Becej
Bečej is a town and municipality located in the South Bačka District in Vojvodina, Serbia. The town has a population of 25,703, while Bečej municipality has 40,877 inhabitants. It is multiethnic town, with Hungarians and Serbs as largest ethnic groups...
, Serbia
Serbia
Serbia , officially the Republic of Serbia , is a landlocked country located at the crossroads of Central and Southeast Europe, covering the southern part of the Carpathian basin and the central part of the Balkans...
Bezons
Bezons
Bezons is a commune in the north-western suburbs of Paris, France. It is located from the centre of Paris.-Transport:Bezons is currently served by no station of the Paris Métro, RER, or suburban rail network. The closest station to Bezons is Houilles – Carrières-sur-Seine station on Paris...
, France
France
The French Republic , The French Republic , The French Republic , (commonly known as France , is a unitary semi-presidential republic in Western Europe with several overseas territories and islands located on other continents and in the Indian, Pacific, and Atlantic oceans. Metropolitan France...
Bietigheim-Bissingen
Bietigheim-Bissingen
Bietigheim-Bissingen is the second-largest town in the district of Ludwigsburg, Baden-Württemberg, Germany with 42,515 inhabitants in 2007. It is situated on the river Enz, close to its confluence with the Neckar, about 19 km north of Stuttgart, and 20 km south of Heilbronn.- Buildings...
, Germany
Germany
Germany , officially the Federal Republic of Germany , is a federal parliamentary republic in Europe. The country consists of 16 states while the capital and largest city is Berlin. Germany covers an area of 357,021 km2 and has a largely temperate seasonal climate...
Făget
Faget
Făget is a town in Timiş County, Banat, western Romania, with a population of about 7,500. Its name literally means "beech tree forest" in Romanian...
, Romania
Romania
Romania is a country located at the crossroads of Central and Southeastern Europe, on the Lower Danube, within and outside the Carpathian arch, bordering on the Black Sea...
Lugoj, Romania Ravenna
Ravenna
Ravenna is the capital city of the Province of Ravenna in the Emilia-Romagna region of Italy and the second largest comune in Italy by land area, although, at , it is little more than half the size of the largest comune, Rome...
, Italy
Italy
Italy , officially the Italian Republic languages]] under the European Charter for Regional or Minority Languages. In each of these, Italy's official name is as follows:;;;;;;;;), is a unitary parliamentary republic in South-Central Europe. To the north it borders France, Switzerland, Austria and...
Tornio
Tornio
Tornio is a town and municipality in Lapland, Finland. The municipality covers an area of of which is water. The population density is , with a total population of . It borders to the Swedish municipality of Haparanda...
, Finland
Finland
Finland , officially the Republic of Finland, is a Nordic country situated in the Fennoscandian region of Northern Europe. It is bordered by Sweden in the west, Norway in the north and Russia in the east, while Estonia lies to its south across the Gulf of Finland.Around 5.4 million people reside...
Waregem
Waregem
Waregem is a municipality located in the Belgian province of West Flanders. The municipality lies in the valley of the Leie River, between Kortrijk and Ghent. It is part of the arrondissement of Kortrijk and comprises the towns of Beveren, Desselgem, Sint-Eloois-Vijve and Waregem proper. On...
, Belgium
Belgium
Belgium , officially the Kingdom of Belgium, is a federal state in Western Europe. It is a founding member of the European Union and hosts the EU's headquarters, and those of several other major international organisations such as NATO.Belgium is also a member of, or affiliated to, many...