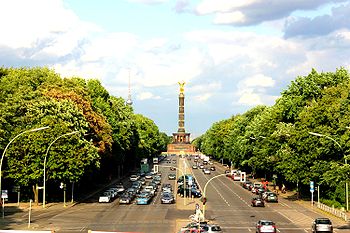 The Straße des 17. Juni (ˈʃtʁaːsə dɛs ˈziːpˌtseːntən ˈjuːniː, 17 June Street) is a street in central Berlin, the capital of Germany. It is the western continuation of the Unter den Linden
Unter den Linden
Unter den Linden is a boulevard in the Mitte district of Berlin, the capital of Germany. It is named for its linden trees that line the grassed pedestrian mall between two carriageways....
. It runs east-west through the Tiergarten
Tiergarten
Tiergarten is a locality within the borough of Mitte, in central Berlin . Notable for the great and homonymous urban park, before German reunification, it was a part of West Berlin...
, a large forest park to the west of the city centre. At the eastern end is the Brandenburg Gate
Brandenburg Gate
The Brandenburg Gate is a former city gate and one of the most well-known landmarks of Berlin and Germany. It is located west of the city centre at the junction of Unter den Linden and Ebertstraße, immediately west of the Pariser Platz. It is the only remaining gate of a series through which...
and at the western end is Ernst-Reuter-Platz in Charlottenburg
Charlottenburg
Charlottenburg is a locality of Berlin within the borough of Charlottenburg-Wilmersdorf, named after Queen consort Sophia Charlotte...
. Halfway along the street is the Berlin victory column
Berlin Victory Column
The Victory Column is a monument in Berlin, Germany. Designed by Heinrich Strack after 1864 to commemorate the Prussian victory in the Danish-Prussian War, by the time it was inaugurated on 2 September 1873, Prussia had also defeated Austria in the Austro-Prussian War and France in the...
(Siegessäule). The Soviet War Memorial
Soviet War Memorial (Tiergarten)
The Soviet War Memorial is one of several war memorials in Berlin, capital city of Germany, erected by the Soviet Union to commemorate its war dead, particularly the 80,000 soldiers of the Soviet Armed Forces who died during the Battle of Berlin in April and May 1945.The memorial is located in the...
, built in 1945, is the only major structure on the course of the street between the Brandenburg Gate and the Siegessäule.

Before 17 June 1953 the street was called Charlottenburger Chaussee, because it ran from the old city center (Berlin-Mitte) to the borough of Charlottenburg through the Tiergarten ("Animal garden"). The name of the street continues about 600 yards west of the park.

It was made into a paved road in 1799, and owing to Berlin's rapid growth in the 19th century it became a major thoroughfare to the affluent western suburbs. At the outbreak of World War One in early August 1914, hundreds of thousands of Berliners cheered the military parade which took place here At the outbreak of World War Two, no such scenes were seen, according to the American journalist and historian William L. Shirer
William L. Shirer
William Lawrence Shirer was an American journalist, war correspondent, and historian, who wrote The Rise and Fall of the Third Reich, a history of Nazi Germany read and cited in scholarly works for more than 50 years...
, but after Adolf Hitler
Adolf Hitler
Adolf Hitler was an Austrian-born German politician and the leader of the National Socialist German Workers Party , commonly referred to as the Nazi Party). He was Chancellor of Germany from 1933 to 1945, and head of state from 1934 to 1945...
returned from his "inspection" of Paris in the summer of 1940 a huge victory parade was held.

Charlottenburger Chausee was a part of Ost-West-Achse (East-West Axis), which during the Nazis became a triumphal avenue lined with Nazi flags. During the Nazi era the boulevard was made broader and the old Prussian victory monument, Berlin victory column
Berlin Victory Column
The Victory Column is a monument in Berlin, Germany. Designed by Heinrich Strack after 1864 to commemorate the Prussian victory in the Danish-Prussian War, by the time it was inaugurated on 2 September 1873, Prussia had also defeated Austria in the Austro-Prussian War and France in the...
(Siegessäule) was moved from outside the Reichstag
Reichstag (building)
The Reichstag building is a historical edifice in Berlin, Germany, constructed to house the Reichstag, parliament of the German Empire. It was opened in 1894 and housed the Reichstag until 1933, when it was severely damaged in a fire. During the Nazi era, the few meetings of members of the...
(which the Nazis never restored after the fire in February 1933) to the roundabout in the middle of the Tiergarten, where it has remained since 1938. In the last weeks of World War II
Battle of Berlin
The Battle of Berlin, designated the Berlin Strategic Offensive Operation by the Soviet Union, was the final major offensive of the European Theatre of World War II....
, when Berlin's airports were unusable, it was used as a landing strip.

In 1953 the street was re-named Straße des 17. Juni, to commemorate the uprising of the East Berliners on 17 June 1953, when the Red Army
Red Army
The Workers' and Peasants' Red Army started out as the Soviet Union's revolutionary communist combat groups during the Russian Civil War of 1918-1922. It grew into the national army of the Soviet Union. By the 1930s the Red Army was among the largest armies in history.The "Red Army" name refers to...
and GDR Volkspolizei
Volkspolizei
The Volkspolizei , or VP, were the national police of the German Democratic Republic . The Volkspolizei were responsible for most law enforcement in East Germany, but its organisation and structure were such that it could be considered a paramilitary force as well...
shot a great number of industrial workers dead. Today the street is sometimes used for mega-events such as love parade
Love Parade
The Love Parade was a popular electronic dance music festival and parade that originated in 1989 in West Berlin, Germany. It was held in Germany annually between 1989 and 2003 in Berlin, and then from 2006 to 2010 in the Ruhr region...
or live8. In summer 2006 the street was closed for six weeks to use it as Fanmeile (fan mile) during the 2006 Football World Cup. It also serves as the starting point for the Berlin Marathon
Berlin Marathon
The Berlin Marathon is a major running and sporting event held annually in Berlin, Germany. The official marathon distance of 42.195 kilometers is set up as a city-wide road race where professional athletes and amateur runners jointly participate...
.