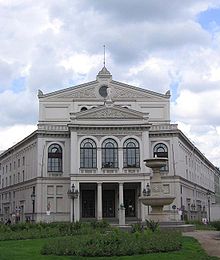 Staatstheater am Gärtnerplatz (State Theatre at Gärtnerplatz) is an opera house
Opera house
An opera house is a theatre building used for opera performances that consists of a stage, an orchestra pit, audience seating, and backstage facilities for costumes and set building...
and opera
Opera
Opera is an art form in which singers and musicians perform a dramatic work combining text and musical score, usually in a theatrical setting. Opera incorporates many of the elements of spoken theatre, such as acting, scenery, and costumes and sometimes includes dance...
company in Munich
Munich
Munich The city's motto is "" . Before 2006, it was "Weltstadt mit Herz" . Its native name, , is derived from the Old High German Munichen, meaning "by the monks' place". The city's name derives from the monks of the Benedictine order who founded the city; hence the monk depicted on the city's coat...
. Designed by the architect Michael Reiffenstuel, it opened on 5 November 1865 as the city's second opera house after the National Theatre
National Theatre (Munich)
The National Theatre Munich is an opera house in Max-Joseph-Platz, in Munich, Germany. It is the home of the Bavarian State Opera, and the Bavarian State Ballet ....
.

At times exclusively concerned with operetta
Operetta
Operetta is a genre of light opera, light in terms both of music and subject matter. It is also closely related, in English-language works, to forms of musical theatre.-Origins:...
, in recent years the theatre has focussed mainly on opera, though there are also productions of operettas, musicals and ballet. The scope of its activities is similar to that of the Komische Oper in Berlin
Berlin
Berlin is the capital city of Germany and is one of the 16 states of Germany. With a population of 3.45 million people, Berlin is Germany's largest city. It is the second most populous city proper and the seventh most populous urban area in the European Union...
or the English National Opera
English National Opera
English National Opera is an opera company based in London, resident at the London Coliseum in St. Martin's Lane. It is one of the two principal opera companies in London, along with the Royal Opera, Covent Garden...
in London
London
London is the capital city of :England and the :United Kingdom, the largest metropolitan area in the United Kingdom, and the largest urban zone in the European Union by most measures. Located on the River Thames, London has been a major settlement for two millennia, its history going back to its...
.

One of the most active theatres in Germany
Germany
Germany , officially the Federal Republic of Germany , is a federal parliamentary republic in Europe. The country consists of 16 states while the capital and largest city is Berlin. Germany covers an area of 357,021 km2 and has a largely temperate seasonal climate...
, its season lasts from September to July and comprises more than 200 performances. The former intendant was Klaus Schultz and the current intendant is Dr. Ulrich Peters. The chief conductor from 1999 to 2010 was the American
United States
The United States of America is a federal constitutional republic comprising fifty states and a federal district...
David Stahl
David Stahl (conductor)
David Stahl was an American conductor who served as the Music Director and Intendant of the Staatstheater am Gärtnerplatz in Munich and the Music Director of the Charleston Symphony Orchestra...
, and the director of dance (TanzTheater München) is Hans Henning Paar.