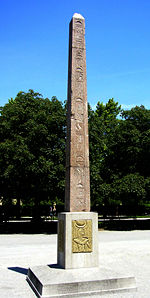 The Staatliches Museum Ägyptischer Kunst (State Museum of Egyptian Art) in Munich
Munich
Munich The city's motto is "" . Before 2006, it was "Weltstadt mit Herz" . Its native name, , is derived from the Old High German Munichen, meaning "by the monks' place". The city's name derives from the monks of the Benedictine order who founded the city; hence the monk depicted on the city's coat...
is the Bavaria
Bavaria
Bavaria, formally the Free State of Bavaria is a state of Germany, located in the southeast of Germany. With an area of , it is the largest state by area, forming almost 20% of the total land area of Germany...
n State Collection for Ancient Egypt art. It displays exhibits from all periods of Ancient Egypt
Ancient Egypt
Ancient Egypt was an ancient civilization of Northeastern Africa, concentrated along the lower reaches of the Nile River in what is now the modern country of Egypt. Egyptian civilization coalesced around 3150 BC with the political unification of Upper and Lower Egypt under the first pharaoh...
's history. The associated small Middle East section displays objects from the areas of Assyria
Assyria
Assyria was a Semitic Akkadian kingdom, extant as a nation state from the mid–23rd century BC to 608 BC centred on the Upper Tigris river, in northern Mesopotamia , that came to rule regional empires a number of times through history. It was named for its original capital, the ancient city of Assur...
n and Babylonia
Babylonia
Babylonia was an ancient cultural region in central-southern Mesopotamia , with Babylon as its capital. Babylonia emerged as a major power when Hammurabi Babylonia was an ancient cultural region in central-southern Mesopotamia (present-day Iraq), with Babylon as its capital. Babylonia emerged as...
n culture. As of 2008 Egyptian museum is located in the Residenz
Residenz, Munich
The Munich Residenz is the former royal palace of the Bavarian monarchs in the center of the city of Munich, Germany...
, but it will be moved to the Kunstareal
Kunstareal
The Kunstareal is a museum quarter in the city centre of Munich, Germany.It consists of the three "Pinakotheken" galleries , the Glyptothek, the Staatliche Antikensammlung , the Lenbachhaus, the Museum Brandhorst and...
in 2011. 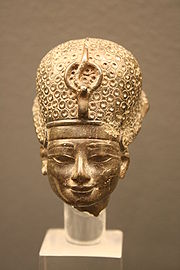 A new, subterranean museum, opposite the Alte Pinakothek
Alte Pinakothek
The Alte Pinakothek is an art museum situated in the Kunstareal in Munich, Germany. It is one of the oldest galleries in the world and houses one of the most famous collections of Old Master paintings...
and reaching underneath the new structure for the University of Television and Film Munich
University of Television and Film Munich
The University of Television and Film Munich is a publicly funded film school in Munich, Germany. The school was established in 1966 by decree of the Bavarian government. The University of Television and Film Munich is one of Germany's most reputable film schools with about 350 students enrolled...
was conceived by the architekt Peter Böhm. The project was inspired by an ancient Egyptian burial chamber. Its entrance area is marked with a portal wall reminiscent of the pylon
Pylon (architecture)
Pylon is the Greek term for a monumental gateway of an Egyptian temple It consists of two tapering towers, each surmounted by a cornice, joined by a less elevated section which enclosed the entrance between them. The entrance was generally about half the height of the towers...
gateways to Egyptian temples.
It offers some 1800 m² of exhibition space, with an additional 400 m² for special exhibitions. It is tentitavely due to open in winter 2011.

The Bavarian state's collection was already founded in the 16th century by Duke Albrecht V
Albert V, Duke of Bavaria
Albert V was Duke of Bavaria from 1550 until his death. He was born in Munich to William IV and Marie Jacobaea of Baden.-Early life:Albert was educated at Ingolstadt under good Catholic teachers...
and extended especially by Charles Theodore, Elector of Bavaria
Charles Theodore, Elector of Bavaria
Charles Theodore, Prince-Elector, Count Palatine and Duke of Bavaria reigned as Prince-Elector and Count palatine from 1742, as Duke of Jülich and Berg from 1742 and also as Prince-Elector and Duke of Bavaria from 1777, until his death...
and King Ludwig I of Bavaria
Ludwig I of Bavaria
Ludwig I was a German king of Bavaria from 1825 until the 1848 revolutions in the German states.-Crown prince:...
. The museum is dedicated to the periods of the early
Old Kingdom
Old Kingdom is the name given to the period in the 3rd millennium BC when Egypt attained its first continuous peak of civilization in complexity and achievement – the first of three so-called "Kingdom" periods, which mark the high points of civilization in the lower Nile Valley .The term itself was...
, middle
Middle Kingdom of Egypt
The Middle Kingdom of Egypt is the period in the history of ancient Egypt stretching from the establishment of the Eleventh Dynasty to the end of the Fourteenth Dynasty, between 2055 BC and 1650 BC, although some writers include the Thirteenth and Fourteenth dynasties in the Second Intermediate...
and late kingdoms
New Kingdom
The New Kingdom of Egypt, also referred to as the Egyptian Empire is the period in ancient Egyptian history between the 16th century BC and the 11th century BC, covering the Eighteenth, Nineteenth, and Twentieth Dynasties of Egypt....
, but also to the Hellenistic
Hellenistic civilization
Hellenistic civilization represents the zenith of Greek influence in the ancient world from 323 BCE to about 146 BCE...
, roman and copt
Copt
The Copts are the native Egyptian Christians , a major ethnoreligious group in Egypt....
ic era of Egypt.

Among the most distinguished exhibits are the famous duplex statue portraiting the pharaoh Nyuserre Ini
Nyuserre Ini
Nyuserre Ini , was a Pharaoh of Egypt during the Fifth dynasty. He is frequently given a reign of 24 or 25 years and is dated from ca. 2445 BC to 2421 BC. His prenomen, Nyuserre, means "Possessed of Re's Power"...
as young and as elder man, the statues of the pharaohs Amenemhat III
Amenemhat III
Amenemhat III, also spelled Amenemhet III was a pharaoh of the Twelfth Dynasty of Egypt. He ruled from c.1860 BC to c.1814 BC, the latest known date being found in a papyrus dated to Regnal Year 46, I Akhet 22 of his rule. He is regarded as the greatest monarch of the Middle Kingdom...
, Ramses II, Thutmosis III and Akhenaten
Akhenaten
Akhenaten also spelled Echnaton,Ikhnaton,and Khuenaten;meaning "living spirit of Aten") known before the fifth year of his reign as Amenhotep IV , was a Pharaoh of the Eighteenth dynasty of Egypt who ruled for 17 years and died perhaps in 1336 BC or 1334 BC...
, the sphinx of Sesostris III and of Amenhotep II
Amenhotep II
Amenhotep II was the seventh Pharaoh of the 18th dynasty of Egypt. Amenhotep inherited a vast kingdom from his father Thutmose III, and held it by means of a few military campaigns in Syria; however, he fought much less than his father, and his reign saw the effective cessation of hostilities...
, the sarcophagus lid of queen Sitdjehuti
Sitdjehuti
Sitdjehuti called Satibu was a princess and queen of the late Seventeenth dynasty of Egypt. She was a daughter of Pharaoh Senakhtenre Tao I and Queen Tetisheri and wife to her brother Seqenenre Tao II...
and the kneeling figure of Senenmut
Senenmut
Senenmut was an 18th dynasty ancient Egyptian architect and government official. His name translates literally as "mother's brother."- Family :...
. The Hellenistic-roman period is represented by master pieces such as the bust of a Seleucid ruler
Seleucid Empire
The Seleucid Empire was a Greek-Macedonian state that was created out of the eastern conquests of Alexander the Great. At the height of its power, it included central Anatolia, the Levant, Mesopotamia, Persia, today's Turkmenistan, Pamir and parts of Pakistan.The Seleucid Empire was a major centre...
and the grand Egyptian statue of Antinous
Antinous
Antinoüs or Antinoös was a beautiful Bithynian youth and the favourite of the Roman emperor Hadrian...
.

Very precious is the treasure of jewellery of the Nubia
Nubia
Nubia is a region along the Nile river, which is located in northern Sudan and southern Egypt.There were a number of small Nubian kingdoms throughout the Middle Ages, the last of which collapsed in 1504, when Nubia became divided between Egypt and the Sennar sultanate resulting in the Arabization...
n Queen Amanishakheto
Amanishakheto
Amanishakheto was a Kandake of Nubia. She seems to have reigned from 10 BC to 1 AD, although most dates of Nubian history before the Middle Ages are very uncertain.In Meroitic hieroglyphs her name is written as Amanikasheto...
. The museum owns also the Assyria
Assyria
Assyria was a Semitic Akkadian kingdom, extant as a nation state from the mid–23rd century BC to 608 BC centred on the Upper Tigris river, in northern Mesopotamia , that came to rule regional empires a number of times through history. It was named for its original capital, the ancient city of Assur...
n Orthostat reliefs from the palace of king Ashur-nasir-pal II
Ashur-nasir-pal II
Ashur-nasir-pal II was king of Assyria from 883 to 859 BC.Ashurnasipal II succeeded his father, Tukulti-Ninurta II, in 883 BC...
and a lion from the Ishtar Gate
Ishtar Gate
The Ishtar Gate was the eighth gate to the inner city of Babylon. It was constructed in about 575 BC by order of King Nebuchadnezzar II on the north side of the city....
of Babylon
Babylon
Babylon was an Akkadian city-state of ancient Mesopotamia, the remains of which are found in present-day Al Hillah, Babil Province, Iraq, about 85 kilometers south of Baghdad...
which were once displayed in the Glyptothek
Glyptothek
The Glyptothek is a museum in Munich, Germany, which was commissioned by the Bavarian King Ludwig I to house his collection of Greek and Roman sculptures . It was designed by Leo von Klenze in the Neoclassical style, and built from 1816 to 1830...
.

Since 1984, the State Museum of Egyptian Art has offered a children's education program during the summer holidays. It combines a short guided tour with handicraft work that the children can take home. Since 2007 similar programs are also offered during the other school holidays.
During the summer holidays and special project days (International Museum Day, Long Night of the Museums), children can complete a Treasure Hunt, answering questions about objects throughout the museum, and receive a prize for correct answers.
Outside of the holidays, the museum offers an "Archaeological Backpack" based on a similar principle and that can be taken out at the front desk.
Both the Treasure Hunt and the Archaeological Backpack are usually also available in English.

The Museum also offers guided tours for schools on the following subjects:
- Ancient Egyptian Culture
- the Gods of Ancient Egypt
- Funerary Beliefs
- The Secret of the Hieroglyphs
- Everyday and Family Life
- The King and the State
- Animals and their importance to the Egyptians

The guided tours cost € 33 and are available in English and French as well.

Since the beginning of the 2008-2009 school year, schools can book a project hour in addition to guided tours.

The exhibition "ISISBLUT UND STEINBOCKHORN - Amulett und Talisman in Altägypten und im Alpenraum", an exhibition showing amulets and talismans from Ancient Egypt and the Alps, is on view from July 22, 2010 to January 9, 2011.

Furthermore, an exhibition of Nubian pottery from the Museum magazines is currently on display at the International Ceramics Museum in Weiden.

Children 16 and under free