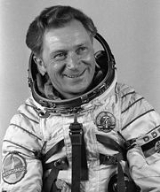 Encyclopedia
Sigmund Werner Paul Jähn (born 13 February 1937) is a German pilot
Aviator
An aviator is a person who flies an aircraft. The first recorded use of the term was in 1887, as a variation of 'aviation', from the Latin avis , coined in 1863 by G. de la Landelle in Aviation Ou Navigation Aérienne...
who became the first German to fly in space as part of the Soviet Union's Interkosmos
Interkosmos
Interkosmos was a space program of the Soviet Union designed to include members of military forces of allied Warsaw Pact countries in manned and unmanned missions...
program.

Jähn was born in Morgenröthe-Rautenkranz
Morgenröthe-Rautenkranz
Morgenröthe-Rautenkranz is a village and a former municipality in the Vogtlandkreis district, in Saxony, Germany. Since 1 October 2009, it is part of the municipality Muldenhammer....
, in the Vogtland
Vogtlandkreis
The Vogtlandkreis is a Landkreis in the southwest of the Free State of Saxony, Germany, at the borders to Thuringia, Bavaria, and the Czech Republic. Neighboring districts are Hof, Saale-Orla, Greiz, Zwickau and Erzgebirgskreis...
district of Saxony
Saxony
The Free State of Saxony is a landlocked state of Germany, contingent with Brandenburg, Saxony Anhalt, Thuringia, Bavaria, the Czech Republic and Poland. It is the tenth-largest German state in area, with of Germany's sixteen states....
, Germany. From 1943 to 1951 he attended school in his hometown, and after school trained as a printer.

In 1955 he joined the (East) German Democratic Republic
German Democratic Republic
The German Democratic Republic , informally called East Germany by West Germany and other countries, was a socialist state established in 1949 in the Soviet zone of occupied Germany, including East Berlin of the Allied-occupied capital city...
(GDR) air force (the Luftstreitkräfte der NVA
Luftstreitkräfte der NVA
The Luftstreitkraefte / Luftverteidigung was the Air Force of East Germany . As with the Landstreitkräfte, the Volksmarine, and the Border troops, it was a military branch of the National People's Army ....
) where he became a pilot and military scientist. From 1966 until 1970 he studied at the Gagarin Air Force Academy
Gagarin Air Force Academy
Gagarin Air Force Academy is the name of a Russian military aviation academy located in Monino , Moscow Region.Gagarin Air Force Academy is one of the leading military educational institutions preparing high ranking military personnel for the Russian Air Force.Among the academy alumni are around...
in Monino
Monino
Monino is an urban locality in Shchyolkovsky District of Moscow Oblast, Russia, situated east of Moscow. Population:...
, in the Soviet Union
Soviet Union
The Soviet Union , officially the Union of Soviet Socialist Republics , was a constitutionally socialist state that existed in Eurasia between 1922 and 1991....
, and afterwards worked in the administration of the East German air force, responsible for pilot education and flight safety.

Starting in 1990, after German reunification
German reunification
German reunification was the process in 1990 in which the German Democratic Republic joined the Federal Republic of Germany , and when Berlin reunited into a single city, as provided by its then Grundgesetz constitution Article 23. The start of this process is commonly referred by Germans as die...
, he worked as a freelance consultant for the formerly West German spaceflight agency German Aerospace Center
German Aerospace Center
The German Aerospace Center is the national centre for aerospace, energy and transportation research of the Federal Republic of Germany. It has multiple locations throughout Germany. Its headquarters are located in Cologne. It is engaged in a wide range of research and development projects in...
(DLR), and from 1993 also for the European Space Agency
European Space Agency
The European Space Agency , established in 1975, is an intergovernmental organisation dedicated to the exploration of space, currently with 18 member states...
(ESA) to prepare for the Euromir
Mir
Mir was a space station operated in low Earth orbit from 1986 to 2001, at first by the Soviet Union and then by Russia. Assembled in orbit from 1986 to 1996, Mir was the first modular space station and had a greater mass than that of any previous spacecraft, holding the record for the...
missions. In 2002 he finally retired from this job.

Jähn is married and has two children. He lives in Strausberg
Strausberg
Strausberg is a city in Brandenburg, Germany, located 30 km east of Berlin. With a population of 26,206 in 2010 it is the largest town in the district of Märkisch-Oderland.-History:...
and he enjoys reading and hunting.

In 1976, Jähn was selected with his backup Eberhard Köllner
Eberhard Köllner
Eberhard Köllner was selected for Soyuz 31 as the backup for Sigmund Jähn.He later became the Director of the Airforce Academy of the German Democratic Republic in the rank of an Oberst , following the reunion of Germany he refused to be transferred to the German Bundeswehr...
for the Interkosmos
Interkosmos
Interkosmos was a space program of the Soviet Union designed to include members of military forces of allied Warsaw Pact countries in manned and unmanned missions...
program. He trained in Star City
Star City, Russia
Star City is a common name of an area in Moscow Oblast, Russia, which has since the 1960s been home to the Yuri Gagarin Cosmonaut Training Center...
near Moscow for the next two years, and flew on board Soyuz 31
Soyuz 31
-Backup crew:-Mission parameters:*Mass: *Perigee: *Apogee: *Inclination: 51.64°*Period: 88.81 minutes-Mission highlights:Soyuz 31, the third Intercosmos flight, was launched 26 August 1978...
(launched 26 August 1978) to the Soviet space station
Space station
A space station is a spacecraft capable of supporting a crew which is designed to remain in space for an extended period of time, and to which other spacecraft can dock. A space station is distinguished from other spacecraft used for human spaceflight by its lack of major propulsion or landing...
Salyut 6
Salyut 6
Salyut 6 , DOS-5, was a Soviet orbital space station, the eighth flown as part of the Salyut programme. Launched on 29 September 1977 by a Proton rocket, the station was the first of the 'second-generation' type of space station. Salyut 6 possessed several revolutionary advances over the earlier...
, and returned on Soyuz 29
Soyuz 29
Soyuz 29 was a 1978 manned Soviet space mission to the Salyut 6 space station. It was the fifth mission, the fourth successful docking, and the second long-duration crew for the orbiting station...
, landing on 3 September 1978. He spent 7 days, 20 hours, and 49 minutes in space.

During and after the flight, he and the socialist authorities of the GDR pronounced him "the first German cosmonaut", which was remarkable, as in those days the East German state normally stressed that their people were "GDR citizens", to distinguish themselves from West Germany.