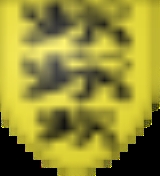 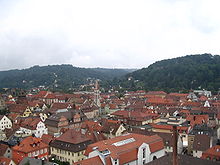 Schwäbisch Gmünd (ˈʃvɛːbɪʃ ˈɡmʏnd̥) is a town in the eastern part of the German
Germany
Germany , officially the Federal Republic of Germany , is a federal parliamentary republic in Europe. The country consists of 16 states while the capital and largest city is Berlin. Germany covers an area of 357,021 km2 and has a largely temperate seasonal climate...
state of Baden-Württemberg
Baden-Württemberg
Baden-Württemberg is one of the 16 states of Germany. Baden-Württemberg is in the southwestern part of the country to the east of the Upper Rhine, and is the third largest in both area and population of Germany's sixteen states, with an area of and 10.7 million inhabitants...
. With a population of around 62,000, the town is the second largest in the Ostalbkreis
Ostalbkreis
The Ostalbkreis is a district in the east of Baden-Württemberg, Germany, on the border to Bavaria. Neighboring districts are Schwäbisch Hall, Ansbach, Donau-Ries, Heidenheim, Göppingen and Rems-Murr.-History:...
and the whole region of East Württemberg
Württemberg
Württemberg , formerly known as Wirtemberg or Wurtemberg, is an area and a former state in southwestern Germany, including parts of the regions Swabia and Franconia....
after Aalen
Aalen
Aalen is a city in the German state of Baden-Württemberg, about east of Stuttgart and north of Ulm. It is the seat of the Ostalbkreis district, and its largest city, as well as the largest city within the Ostwürttemberg region. In spatial planning, Aalen is designated a Mittelzentrum...
. The town is a Große Kreisstadt, a chief town under district administration; it was the chief town of its own rural district until the district reform on January 1, 1973.

Schwäbisch Gmünd lies on the Rems
Rems
The Rems is a right tributary of the Neckar in eastern Baden-Württemberg. It is 78 km long. Its source is in Essingen, near Aalen. It flows generally west through the towns Böbingen an der Rems, Schwäbisch Gmünd, Plüderhausen, Schorndorf, Remshalden and Waiblingen. At Remseck the Rems flows...
river about 50 kilometers east of Stuttgart
Stuttgart
Stuttgart is the capital of the state of Baden-Württemberg in southern Germany. The sixth-largest city in Germany, Stuttgart has a population of 600,038 while the metropolitan area has a population of 5.3 million ....
, the capital of Baden-Württemberg. It also lies at the northern foot of the Swabian Jura Mountains
Swabian Alb
The Swabian Alps or Swabian Jura is a low mountain range in Baden-Württemberg, Germany, extending 220 km from southwest to northeast and 40 to 70 km in width. It is named after the region of Swabia....
.

From 85 AD, the Neckar-Odenwald line was the frontier of the Roman Empire. The Romans
Roman Empire
The Roman Empire was the post-Republican period of the ancient Roman civilization, characterised by an autocratic form of government and large territorial holdings in Europe and around the Mediterranean....
built the Limes Germanicus
Limes Germanicus
The Limes Germanicus was a line of frontier fortifications that bounded the ancient Roman provinces of Germania Inferior, Germania Superior and Raetia, dividing the Roman Empire and the unsubdued Germanic tribes from the years 83 to about 260 AD...
to secure this border. Along the border they built fortifications in regular distances, which included a small castrum
Castra
The Latin word castra, with its singular castrum, was used by the ancient Romans to mean buildings or plots of land reserved to or constructed for use as a military defensive position. The word appears in both Oscan and Umbrian as well as in Latin. It may have descended from Indo-European to Italic...
on the site of the Schirenhof farm in Schwäbisch Gmünd.

The first major settlement in this area was around the 2nd century AD, when Roman soldiers settled nearby the Limes. In the 3rd century the border lines were assaulted and taken by the Alemans, who settled down in the areas abandoned by the Romans.

In the 8th century a false document in the name of Charlemagne
Charlemagne
Charlemagne was King of the Franks from 768 and Emperor of the Romans from 800 to his death in 814. He expanded the Frankish kingdom into an empire that incorporated much of Western and Central Europe. During his reign, he conquered Italy and was crowned by Pope Leo III on 25 December 800...
, in the Monastery of St Denis near Paris
Paris
Paris is the capital and largest city in France, situated on the river Seine, in northern France, at the heart of the Île-de-France region...
mentioned a monk's cell called Gamundias built by Abbot Fulrad of St Denis. Whether or not this refers to Gmünd is uncertain. There are no archaeological indications for a cell of this type in Gmünd.

Schwäbisch Gmünd was founded in the mid-12th century. It was a Free Imperial City
Free Imperial City
In the Holy Roman Empire, a free imperial city was a city formally ruled by the emperor only — as opposed to the majority of cities in the Empire, which were governed by one of the many princes of the Empire, such as dukes or prince-bishops...
from 1268 until 1803, when it passed to Württemberg.

By the end of the 14th Century, the name "Etzel castle" was used for the remains of the Roman fort, which had been built to protect the Neckar-Odenwald border of the Roman Empire. In a baroque chronicle of the city of Schwäbisch Gmünd, written by the councillor Friedrich Vogt (1623-1674), the "Castle" was mentioned in ancient writings as "Etzel castle". Even at the time of Vogt, the Roman remains were cheaper than stones from quarry, and these were thus removed to the ground. Only parts of the moat would still be visible.

The demesne
Demesne
In the feudal system the demesne was all the land, not necessarily all contiguous to the manor house, which was retained by a lord of the manor for his own use and support, under his own management, as distinguished from land sub-enfeoffed by him to others as sub-tenants...
officer, wine expert and archaeologist Carl Friedrich Christoph Gok (1776-1849), a half brother of the poet Friedrich Hölderlin
Friedrich Hölderlin
Johann Christian Friedrich Hölderlin was a major German lyric poet, commonly associated with the artistic movement known as Romanticism. Hölderlin was also an important thinker in the development of German Idealism, particularly his early association with and philosophical influence on his...
, suspected in 1847, that the alleged castle on the Schirenhof farm had probably once been a Roman fort.

The first modern and scientific excavations took place under the guidance of retired army chief of staff of the Württemberg army, General Eduard von Kallee
Eduard von Kallee
Eduard von Kallee was a German Major General und archaeologist.-Biography:...
and by Major Heinrich Steimle in the years 1886 to 1888, i.e. before the Empire-Limes-Commission (Reichslimeskommision) had been set up. The so called Schirenhof Castrum is now part of the UNESCO
UNESCO
The United Nations Educational, Scientific and Cultural Organization is a specialized agency of the United Nations...
World Heritage Site
World Heritage Site
A UNESCO World Heritage Site is a place that is listed by the UNESCO as of special cultural or physical significance...
Limes Germanicus.

In 2004, the state of Baden-Württemberg opened the Landesgymnasium für Hochbegabte (State Grammar School for the Highly Gifted) in some of the renovated buildings of the Bismarck Kaserne.

Since the 17th century, Schwäbisch Gmünd has been home to producers of gold
Gold
Gold is a chemical element with the symbol Au and an atomic number of 79. Gold is a dense, soft, shiny, malleable and ductile metal. Pure gold has a bright yellow color and luster traditionally considered attractive, which it maintains without oxidizing in air or water. Chemically, gold is a...
and silver
Silver
Silver is a metallic chemical element with the chemical symbol Ag and atomic number 47. A soft, white, lustrous transition metal, it has the highest electrical conductivity of any element and the highest thermal conductivity of any metal...
handicrafts. The town is also home to the Forschungsinstitut für Edelmetalle und Metallchemie, an institute for precious metal
Precious metal
A precious metal is a rare, naturally occurring metallic chemical element of high economic value.Chemically, the precious metals are less reactive than most elements, have high lustre, are softer or more ductile, and have higher melting points than other metals...
work and surface technology. Other important industries include automotive suppliers, manufacturers of machinery and glass, and a large subsidiary of the Swiss toiletries and medicine producer Weleda
Weleda
Weleda is a multinational company that produces both natural beauty products and natural medicines. Both branches design their products based on anthroposophic principles. The company takes its name from the German form of the name of the 1st century Bructeri völva Veleda. They use plants grown...
.

Schwäbisch Gmünd is twinned
Town twinning
Twin towns and sister cities are two of many terms used to describe the cooperative agreements between towns, cities, and even counties in geographically and politically distinct areas to promote cultural and commercial ties.- Terminology :...
with: Barnsley
Barnsley
Barnsley is a town in South Yorkshire, England. It lies on the River Dearne, north of the city of Sheffield, south of Leeds and west of Doncaster. Barnsley is surrounded by several smaller settlements which together form the Metropolitan Borough of Barnsley, of which Barnsley is the largest and...
, United Kingdom
United Kingdom
The United Kingdom of Great Britain and Northern IrelandIn the United Kingdom and Dependencies, other languages have been officially recognised as legitimate autochthonous languages under the European Charter for Regional or Minority Languages...
Antibes
Antibes
Antibes is a resort town in the Alpes-Maritimes department in southeastern France.It lies on the Mediterranean in the Côte d'Azur, located between Cannes and Nice. The town of Juan-les-Pins is within the commune of Antibes...
, France
France
The French Republic , The French Republic , The French Republic , (commonly known as France , is a unitary semi-presidential republic in Western Europe with several overseas territories and islands located on other continents and in the Indian, Pacific, and Atlantic oceans. Metropolitan France...
Bethlehem
Bethlehem, Pennsylvania
Bethlehem is a city in Lehigh and Northampton Counties in the Lehigh Valley region of eastern Pennsylvania, in the United States. As of the 2010 census, the city had a total population of 74,982, making it the seventh largest city in Pennsylvania, after Philadelphia, Pittsburgh, Allentown, Erie,...
, Pennsylvania
Pennsylvania
The Commonwealth of Pennsylvania is a U.S. state that is located in the Northeastern and Mid-Atlantic regions of the United States. The state borders Delaware and Maryland to the south, West Virginia to the southwest, Ohio to the west, New York and Ontario, Canada, to the north, and New Jersey to...
, United States
United States
The United States of America is a federal constitutional republic comprising fifty states and a federal district...
Székesfehérvár
Székesfehérvár
Székesfehérvár is a city in central Hungary and is the 9th largest in the country. Located around southwest of Budapest. It is inhabited by 101,973 people , with 136,995 in the Székesfehérvár Subregion. The city is the centre of Fejér county and the regional centre of Central Transdanubia...
, Hungary
Hungary
Hungary , officially the Republic of Hungary , is a landlocked country in Central Europe. It is situated in the Carpathian Basin and is bordered by Slovakia to the north, Ukraine and Romania to the east, Serbia and Croatia to the south, Slovenia to the southwest and Austria to the west. The...
Faenza
Faenza
Faenza is an Italian city and comune, in the province of Ravenna, Emilia-Romagna, situated 50 km southeast of Bologna.Faenza is noted for its manufacture of majolica ware glazed earthenware pottery, known from the name of the town as "faience"....
, Italy
Italy
Italy , officially the Italian Republic languages]] under the European Charter for Regional or Minority Languages. In each of these, Italy's official name is as follows:;;;;;;;;), is a unitary parliamentary republic in South-Central Europe. To the north it borders France, Switzerland, Austria and...