Encyclopedia
Saint-Étienne is a city in eastern central France. It is located in the Massif Central
Massif Central
The Massif Central is an elevated region in south-central France, consisting of mountains and plateaux....
, 60 km (37.28 mi) southwest of Lyon
Lyon
Lyon , is a city in east-central France in the Rhône-Alpes region, situated between Paris and Marseille. Lyon is located at from Paris, from Marseille, from Geneva, from Turin, and from Barcelona. The residents of the city are called Lyonnais....
in the Rhône-Alpes region
Rhône-Alpes
Rhône-Alpes is one of the 27 regions of France, located on the eastern border of the country, towards the south. The region was named after the Rhône River and the Alps mountain range. Its capital, Lyon, is the second-largest metropolitan area in France after Paris...
, along the trunk road that connects Toulouse
Toulouse
Toulouse is a city in the Haute-Garonne department in southwestern FranceIt lies on the banks of the River Garonne, 590 km away from Paris and half-way between the Atlantic Ocean and the Mediterranean Sea...
with Lyon. Saint-Étienne is the capital of the Loire
Loire
Loire is an administrative department in the east-central part of France occupying the River Loire's upper reaches.-History:Loire was created in 1793 when after just 3½ years the young Rhône-et-Loire department was split into two. This was a response to counter-Revolutionary activities in Lyon...
département and has a population of approximately 178,500 in the city itself expanding to over 317,000 in the metropolitan area (2007).

The city is named after Saint Stephen
Saint Stephen
Saint Stephen The Protomartyr , the protomartyr of Christianity, is venerated as a saint in the Roman Catholic, Anglican, Lutheran, Oriental Orthodox and Eastern Orthodox Churches....
, and is mentioned for the first time in the Middle Ages as Saint-Étienne de Furan (an affluent of the Loire
Loire
Loire is an administrative department in the east-central part of France occupying the River Loire's upper reaches.-History:Loire was created in 1793 when after just 3½ years the young Rhône-et-Loire department was split into two. This was a response to counter-Revolutionary activities in Lyon...
). In the 13th century it was a small borough around the church dedicated to Saint Etienne. On the upper reaches of the Furan near the Way of St. James
Way of St. James
The Way of St. James or St. James' Way is the pilgrimage route to the Cathedral of Santiago de Compostela in Galicia in northwestern Spain, where tradition has it that the remains of the apostle Saint James are buried....
the Abbey of Valbenoîte had been founded by the cistercians in 1222. In the late 15th century it was a fortified village defended by walls built around the original nucleus.

From the 16th century, Saint-Étienne developed an arms manufacturing industry and became a market town. It was this which accounted for the town's importance, although it also became a centre for the manufacture of ribbons and passementerie
Passementerie
Passementerie or passementarie is the art of making elaborate trimmings or edgings of applied braid, gold or silver cord, embroidery, colored silk, or beads for clothing or furnishings....
starting in the 17th century. During the French revolution
French Revolution
The French Revolution , sometimes distinguished as the 'Great French Revolution' , was a period of radical social and political upheaval in France and Europe. The absolute monarchy that had ruled France for centuries collapsed in three years...
, Saint-Étienne was briefly renamed Armeville – 'arms town' – because of this activity.

Later, it became a coal mining centre, and more recently, has been known for its bicycle industry.

In the first half of the 19th century, it was only a chief town of an arrondissement in the of the Loire, with a population of 33,064 in 1832. The concentration of industry prompted these numbers to rise rapidly to 110,000 by about 1880. It was this growing importance of Saint-Étienne that led to its being made seat of the prefecture and the departmental administration on 25 July 1855, when it became the chief town in the and seat of the prefect, replacing Montbrison
Montbrison, Loire
Montbrison is a commune in the Loire department in central France.The commune gives its name to the popular blue cheese Fourme de Montbrison which has been made in the region for centuries.-History:...
, which was reduced to the status of chief town of an . Saint-Étienne absorbed the commune of Valbenoîte and several other neighbouring localities on 31 March 1855.

Saint-Étienne became a popular stop for automobile travelers in the early 20th century (sometimes referred to as The Golden Age of Travel).

In 1990 Saint-Étienne set up a design biennale – the largest of its kind in France. It lasts around two weeks and takes place in November. The next convention is in 2010. A landmark in the history of the importance ascribed to design in Saint-Étienne was the inauguration of La Cité du design on the site of the former arms factory in 2009.

The city also launched the Massenet Festival
Massenet Festival
Massenet Festival is a biennale festival of music by French composer, Jules Massenet held at Saint-Étienne, France, close to the area where the composer was born....
s, (the composer Jules Massenet
Jules Massenet
Jules Émile Frédéric Massenet was a French composer best known for his operas. His compositions were very popular in the late 19th and early 20th centuries, and he ranks as one of the greatest melodists of his era. Soon after his death, Massenet's style went out of fashion, and many of his operas...
hailed from the area) devoted mainly to perform Massenet's operas. In 2000 the city was named one of the French Towns and Lands of Art and History
French towns and lands of Art and History
Since 1985, the French Ministry of Culture and Communication has pursued a policy of preserving and promoting France's heritage. Historic towns and districts have been designated Villes et Pays d'Art et d'Histoire ....
. On 22 November 2010, it was nominated as "City of Design" as part of Unesco
UNESCO
The United Nations Educational, Scientific and Cultural Organization is a specialized agency of the United Nations...
’s Creative Cities Network
Creative Cities Network
Not to be confused with:*Creative Cities, an international European project designed and managed by the British Council.*Creative city, an urban planning concept.*Creative City, an urban development project in Fujairah, United Arab Emirates....
.

Inhabitants of Saint-Étienne are called stéphanois in French. They are named so because "Étienne" derives from the Greek Stephanos.

The city's football club AS Saint-Étienne
AS Saint-Étienne
Association Sportive de Saint-Étienne Loire is a French association football club based in Saint-Étienne. The club was founded in 1919 and currently play in Ligue 1, the top division of French football. Saint-Étienne plays its home matches at the Stade Geoffroy-Guichard located within the city...
has won the Ligue 1
Ligue 1
Ligue 1 , is the French professional league for association football clubs. It is the country's primary football competition and serves as the top division of the French football league system. Ligue 1 is one of two divisions making up the Ligue de Football Professionnel, the other being Ligue 2....
title a record ten times, achieving most of their success in the 1970s. British indie-dance band Saint Etienne
Saint Etienne (band)
Saint Etienne are an English Pop group comprising Sarah Cracknell, Bob Stanley and Pete Wiggs. They are named after the French football team AS Saint-Étienne.-History:Bob Stanley and Pete Wiggs were childhood friends and former music journalists...
named themselves after the club.

St. Étienne was the capital of the French bicycle industry. The bicycle wheel
Bicycle wheel
A bicycle wheel is a wheel, most commonly a wire wheel, designed for bicycle. A pair is often called a wheelset, especially in the context of ready built "off the shelf" performance-oriented wheels....
manufacturer Mavic
Mavic
Mavic is a French bicycle parts manufacturer, its name an acronym for Manufacture d'Articles Vélocipédiques Idoux et Chanel, founded by Charles Idoux and Lucien Chanel. The company is noted as a manufacturer of bicycle wheels. Mavic is based in Annecy, France...
is based in the city and frame manufacturers Motobécane
Motobécane
Motobécane was a French manufacturer of bicycles, mopeds, motorcycles, and other small vehicles, established in 1923. "Motobécane" is a compound of "moto", slang for motorcycle; "bécane" is slang for "bike."...
and Vitus
Vitus (bicycles)
Vitus is a French bicycle manufacturer best known for its steel cycle frame tubing, and its frames built with aluminium tubes joined to aluminium lugs by bonding - a construction method the company pioneered in the late 1970s . Compared to modern aluminium bicycle frames, early Vitus aluminium...
are also based here. The city often hosts a stage of the Tour de France
Tour de France
The Tour de France is an annual bicycle race held in France and nearby countries. First staged in 1903, the race covers more than and lasts three weeks. As the best known and most prestigious of cycling's three "Grand Tours", the Tour de France attracts riders and teams from around the world. The...
.

St. Étienne resident Thierry Gueorgiou
Thierry Gueorgiou
Thierry Gueorgiou is a French orienteer who has won more than 20 gold medals in international competitions, including the World Orienteering Championships middle distance event seven times: 2003–2005, 2007–2009 and 2011.-Clubs:Gueorgiou runs for two orienteering clubs, the French NO St-Etienne...
is a world champion in orienteering
Orienteering
Orienteering is a family of sports that requires navigational skills using a map and compass to navigate from point to point in diverse and usually unfamiliar terrain, and normally moving at speed. Participants are given a topographical map, usually a specially prepared orienteering map, which they...
. The local rugby union
Rugby union
Rugby union, often simply referred to as rugby, is a full contact team sport which originated in England in the early 19th century. One of the two codes of rugby football, it is based on running with the ball in hand...
team is CA Saint-Étienne Loire Sud Rugby
CA Saint-Étienne Loire Sud Rugby
Club Athlétique de Saint-Étienne Loire Sud Rugby, CASE Loire Sud Rugby, or simply CASE, is a French rugby union club from Saint-Étienne in the Loire département. They are currently competing in Fédérale 1, having been relegated from Rugby Pro D2 at the end of the 2010–11 season.-History:The club...
. 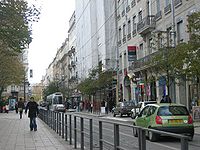 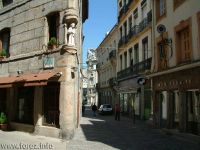 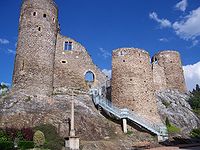 Saint-Étienne is also notable for its tramway (Saint-Étienne tramway) – which uniquely with Lille, it kept throughout the 20th century.

Saint-Étienne was the birthplace of

Saint-Étienne is twinned
Town twinning
Twin towns and sister cities are two of many terms used to describe the cooperative agreements between towns, cities, and even counties in geographically and politically distinct areas to promote cultural and commercial ties.- Terminology :...
with: