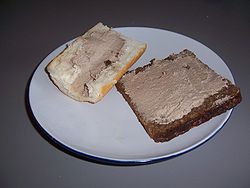 Rugbrød is a very commonly used bread
Bread
Bread is a staple food prepared by cooking a dough of flour and water and often additional ingredients. Doughs are usually baked, but in some cuisines breads are steamed , fried , or baked on an unoiled frying pan . It may be leavened or unleavened...
in Denmark
Denmark
Denmark is a Scandinavian country in Northern Europe. The countries of Denmark and Greenland, as well as the Faroe Islands, constitute the Kingdom of Denmark . It is the southernmost of the Nordic countries, southwest of Sweden and south of Norway, and bordered to the south by Germany. Denmark...
. The common rugbrød usually resembles a long brown rectangle, no more than 12 cm high, and 30–35 cm wide, although shapes and sizes may vary, as well as the ingredients. Sourdough
Sourdough
Sourdough is a dough containing a Lactobacillus culture, usually in symbiotic combination with yeasts. It is one of two principal means of biological leavening in bread baking, along with the use of cultivated forms of yeast . It is of particular importance in baking rye-based breads, where yeast...
is almost always the base; the bread may be made exclusively with rye and wheat flour or contains up to one third whole rye grains. Variants with whole sunflower or other seeds also exist.

The bread is almost always very low in fat, its content comparable to most other varieties of bread. It contains no oil or flavouring (except salt), although it will often contain preservatives to keep it fresh longer. It is rich in whole grain and dietary fiber
Dietary fiber
Dietary fiber, dietary fibre, or sometimes roughage is the indigestible portion of plant foods having two main components:* soluble fiber that is readily fermented in the colon into gases and physiologically active byproducts, and* insoluble fiber that is metabolically inert, absorbing water as it...
and contain little or no sugar, and is thus considered by many Danes as a healthy alternative to whiter types of bread.

Buttered rugbrød is essentially the base on which the famous Danish open sandwich
Open sandwich
An open sandwich, also known as an open face/faced sandwich, Ulrich Sandwich, bread baser, or tartine, consists of a single slice of bread with one or more food items on top.- In various countries :...
smørrebrød
Smørrebrød
Smørrebrød usually consists of a piece of buttered rye bread , a dense, dark brown bread. Pålæg , the topping, then among others can refer to commercial or homemade cold cuts, pieces of meat or fish, cheese or spreads...
is created.