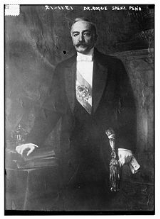 He was responsible for passing the famous Law 8871, known as "Sáenz Peña Law
Sáenz Peña Law
The Sáenz Peña Law was Law 8871 of Argentina, sanctioned by the National Congress on 10 February 1912, which established the universal, secret and mandatory male suffrage though the creation of an electoral list...
", which greatly reformed the Argentine electoral system, making the vote secret, universal and compulsory for males. This effectively ended the rule by electoral fraud of the conservative Argentine oligarchy, and paved the way for the rise of the Radical Civic Union
Radical Civic Union
The Radical Civic Union is a political party in Argentina. The party's positions on issues range from liberal to social democratic. The UCR is a member of the Socialist International. Founded in 1891 by radical liberals, it is the oldest political party active in Argentina...
in the first free elections of the country. President Roque Sáenz Peña Avenue
President Roque Sáenz Peña Avenue
Avenida Roque Sáenz Peña , is a main artery in the San Nicolás quarter of Buenos Aires, Argentina. It is oriented south-east/north-west, diagonally bisecting the city blocks which give the city centre a checkerboard plan...
in Buenos Aires
Buenos Aires
Buenos Aires is the capital and largest city of Argentina, and the second-largest metropolitan area in South America, after São Paulo. It is located on the western shore of the estuary of the Río de la Plata, on the southeastern coast of the South American continent...
is named after him.

He also participated in the War of the Pacific
War of the Pacific
The War of the Pacific took place in western South America from 1879 through 1883. Chile fought against Bolivia and Peru. Despite cooperation among the three nations in the war against Spain, disputes soon arose over the mineral-rich Peruvian provinces of Tarapaca, Tacna, and Arica, and the...
(1879–1883), as an officer of the Peruvian Army, and was made prisoner by Chile for six months.